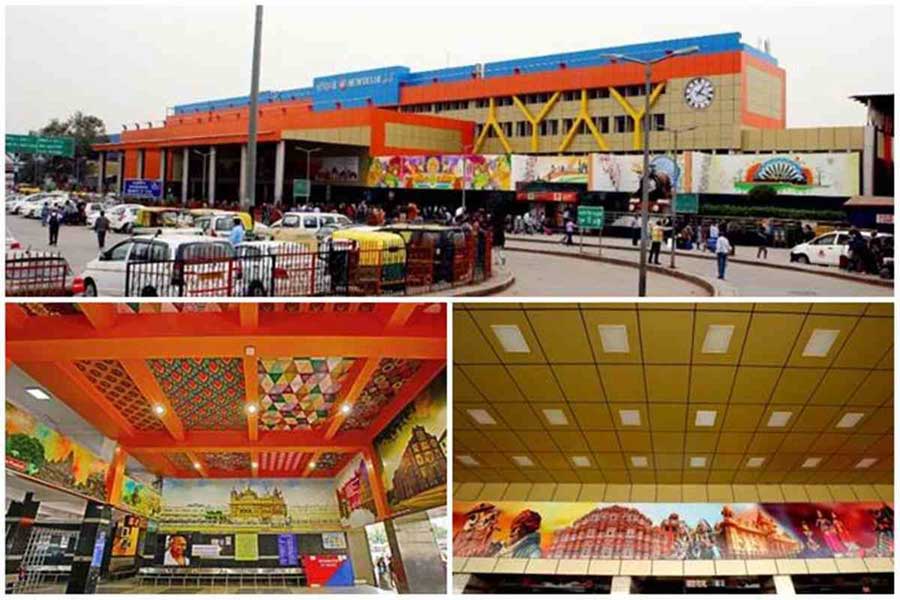 Indian Railways is continuously putting up its best efforts towards redevelopment and up gradation of the railway stations across the country to ease the convenience of the passengers. The stations are now being provided with first-class facilities and amenities like WiFi, food courts, Kiosks, Restaurants, waiting rooms and much more.

Besides this, they are also being beautified with artistic works and wall paintings to make them even more attractive. In this article, we have presented 10 of the railway stations which look beautiful after getting redeveloped by the Indian Railways.

Have a look at recent redevelopment at 11 railway stations

Manduadih Station in Varanasi is one of the most beautiful railway stations in the country. The railway station has been upgraded with many decors and basic amenities including wall paintings and beautiful murals.

You will not believe that it looks like an airport. It features a spacious cafeteria hall, waiting hall, AC and Non AC Lounge etc.

The station has been revamped and upgraded with attractive designs and patterns.

The building of the railway station looks extremely beautiful and vibrant. Improved cleanliness will now give passengers a world-class feel.

Old Delhi Railway Station is one of the most iconic railway stations in India.

The railway station is expected to get permanent facade lighting with the ability to change colours. Sounds amazing right?

The railway station is beautifully adorned with attractive paintings and wall designs.

The station has got a makeover in such a way that it looks no less than any hotel or airport. It has got clean platforms, better circulating area and modern amenities.

The station is so spacious that any travellers or passenger can walk around easily all over.

Moreover, the station also has ATMs, Kiosks and some shops.

The Sambalpur station has taken a new look.

It has now been integrated with a spacious AC waiting hall where passengers can relax and wait for their train.

With attractive wall painting and beautiful murals, it looks really beautiful and attractive. It is also known for its cleanliness throughout the world.

This railway station also looks no less than like an airport.

It is equipped with all the basic and luxury amenities with upgraded entrance and interiors.

The railway station has been beautified using the paintings of spectacular singer Lata Mangeshkar and other artists and musicians.

The railway station has recently got a decent makeover.

It has now new entry and exit doors, AC waiting halls, dormitories, VIP rooms, new and improved circulating area and many more facilities to ease the convenience of the passengers who travel very frequently.