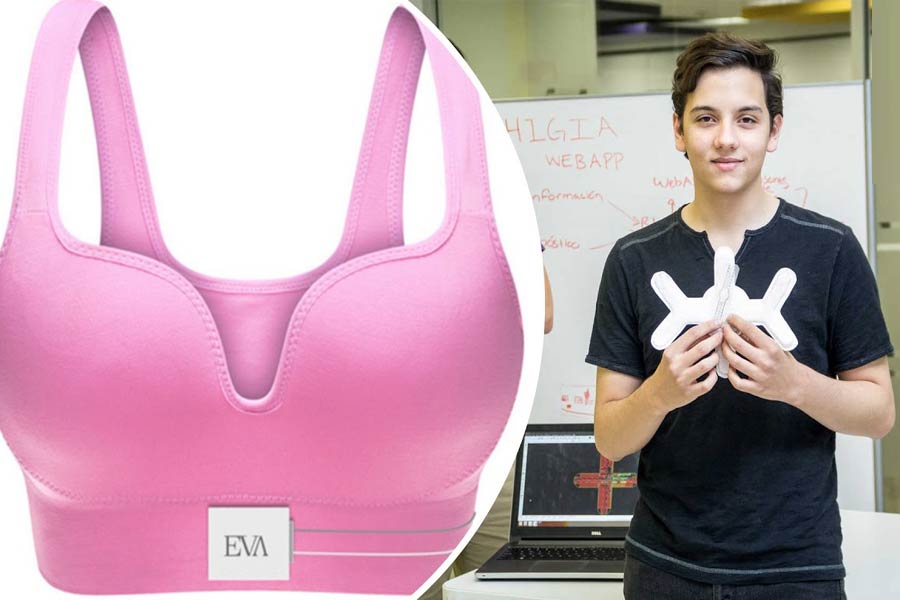 These days where teenagers are busy in drinking and partying all night, this 18- year old teenager who is the CEO and co-founder of Higia Technologies, Julián Ríos Cantú has done something which is truly very inspiring for all the women out there, especially those who are surviving with the deadly disease like cancer. He developed Eva, which is an auto-exploration bra that helps women detect breast cancer at an early stage. He told that after losing his mother due to breast cancer, he got the motivation to design something like this bra to save the life of other women who fight against such disease. So, his dedication and his hard work pay him off as he has successfully created Eva for all the women.

He further says, “When I was 13 years old, my mother was diagnosed for the second time with breast cancer,”  The tumour went from having the dimensions of a grain of rice to that of a golf ball in less than six months. The diagnosis came too late and my mother lost both of her breasts and, almost, her life.

Do you know his device has also won the top prize at the Global Student Entrepreneur Awards finals competition in which 56 student entrepreneurs from 56 countries competed against each other?

Cantu’s innovative technology equipped Eva also made him earned Mexico’s Presidential Medal for Science and Technology in the year 2018. In 2018, he also received a $120,000 investment from Y Combinator to fund his project for further growth. Higia Technologies has also won first place in SXSW’s International Pitch Competition and was named one of “30 Most Promising Businesses of 2018” by Forbes Magazine Mexico. What a proud moment for the self-made entrepreneur.

How does Eva work?

Eva works on its tactile sensors that map the breast surface, and monitor its texture, colour, and temperature.  All the users who are using this device to diagnose cancer can see their condition via a mobile or desktop app. He also ensures that whatever data they take is safely stored with them.

However, the invention is just a prototype; it will soon be launched in the market for using it. Creators estimate that it will be certified for use in two years.

Cantu says Eva is safe and sound for all women

Cantu has told that Eva can be used by women of all age types. The technology used in the bra Eva does not emit any kind of harmful radiation; women of all ages can easily use it without doubt about it. They can even use it regularly to monitor or detect their breast health at their own convenience.

Sadly, Cantu lost his mother due to cancer and he took so much time to come up with this innovative idea to save the women all around the world who die because of this deadly disease. Now, it will become easy for the women to pre-diagnose breast cancer at early stages so that they can save their life. Hats off to you boy. We are proud of you.

6 Beauty Tips That You Need to Try ASAP

Choose the Right Bridal Bouquet – 5 Things You Need to Know

4 Occasion Outfits Every Person Should Own

Probiotics for Different Skin Types: Will it Work?