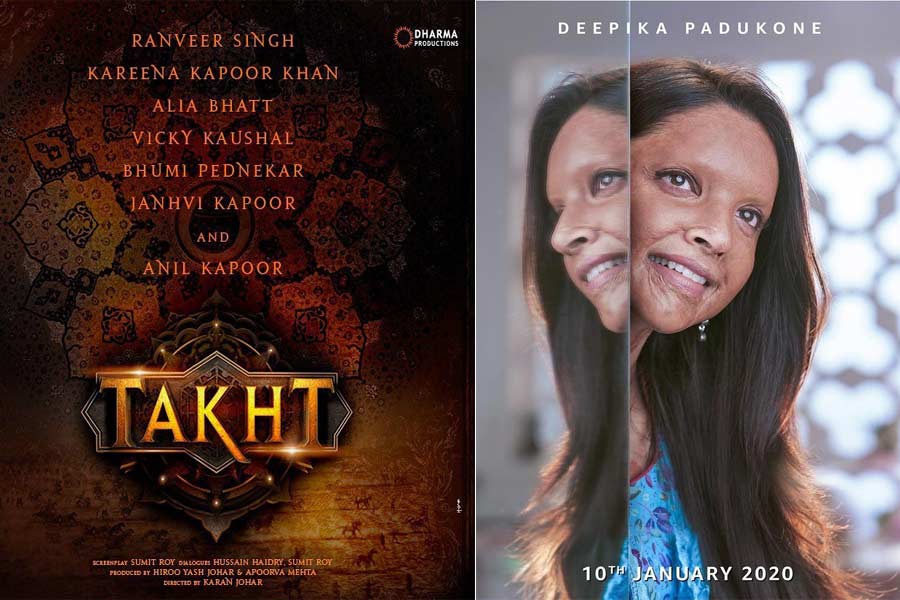 If you are a movie lover, then you might be knowing that the year 2019 was the year of fabulous and hit movies. Some of the hit movies released in 2019 were Gully Boy, Uri-The Surgical Strike, Kabir Singh, Super 30, Article 15 and lots more. I have seen watched them all. Did you? If not, then don’t need to worry as we have brought up something very exciting for you that will be coming next year. Yes, some of the movies that are expected that they will be going to be a hit one.

Have a look at some of the movies that will be releasing in 2020 and we are super excited to watch them.

Takht is one of the biggest projects of Karan Johar. The lead cast for the movie will be Ranveer Singh, Alia Bhatt, Kareena Kapoor Khan, Vicky Kaushal, Bhumi Pednekar, Jahnvi Kapoor and Anil Kapoor in significant roles. The movie is about 2 warring brothers from the Mughal era. Karan Johar has compared the movie with his Kabhi Khushi Kabhi gam or K3G of Mughal Era.

Chhapaak is the most awaited movie as it is based on the life of an acid attack survivor, Laxmi Agarwal. The movie is directed by Meghna Gulzar. Deepika will be in the lead role as ‘Malti’ in the movie and Vikrant Massey will be playing the lead role as ‘Amol’ who is a social activist. The movie is slated to release on January 10, 2020.

Shamshera tells the story of a dacoit tribe and their fight for independence during the British rule. The cast in the movie included Sanjay Dutt, Vaani Kapoor, and Ranbir Kapoor. The movie will release in July 2020.

It is a Telugu movie starring Jr. NTR, Ram Charan, Ajay Devgan, Alia Bhatt and Samuthirakani in lead roles. The movie has been directed by S.S. Rajamouli. The movie will be based on freedom fighters. RRR is expected to be released in July 2020.

The movie is a historical drama based on Subedar Taanaji Malusare who is the military leader in the army of Chhatrapati Shivaji Maharaj who lost his life in the battle of Sinhagad. The lead role will be played by Ajay Devgan and Saif Ali Khan. The movie is releasing on January 10, 2020.