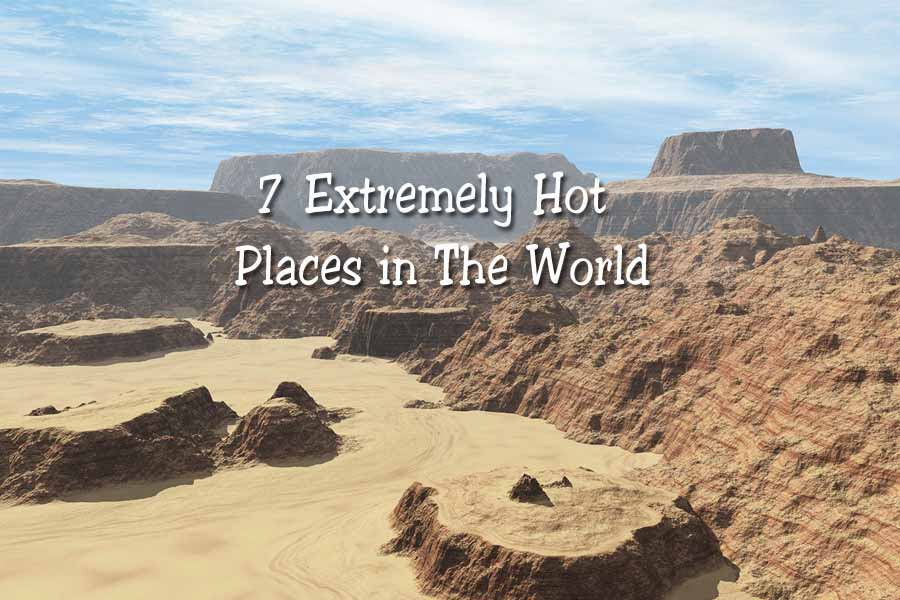 Summer is the season which is hated by everyone, unlike cosy winters. It is the time when snow vanishes and there is no rainfall around. Well, some might say that it is a season of holiday and freshness wherein people gather in huge groups on beaches or on their favourite holiday destination to wipe away all the sweat and hotness. Yet, we have some extreme sports in the world that are incredibly hot which could leave you all in sweat and making you crave for your air conditioner for which most of us nowadays have got addicted to.

No one could ever imagine spending a day without an air conditioner. This article would let you discover and explore some of the extremely hot places in the world.

Make sure you don’t make your plans to visit these places either purposely or by mistake. Scroll down to know more about them.

It is the hottest place in Asia on record. The place is particularly located in Beit She’an Valley. It is placed 722 feet below the sea level. The temperature here remains approximately 129 degrees. Most of the people here relax into pools fed by springs in order to escape from the excessive heat.

This place is located near the southern edge of the Sahara desert thus making it one of the hottest places in the world. The temperature here reaches around 130 degrees Fahrenheit, but do not lose your hope, the River Niger is only 15 miles away to get away with the heat.

In actual, it is the hottest place on earth. It is a desert plateau which is mostly uninhabited. The place becomes extremely hot during summers as if you are touching the sun itself. The highest temperature recorded in this place is 159.3 degrees Fahrenheit.

This is a city which hardly experiences any rainfall throughout the year. It is located on the shores of Lake Nubia. The hottest temperature at this place was recorded in April 1967 which was 53 degrees Celsius and 127 degrees Fahrenheit.

It is a hot township which is located in the Afar Depression of Ethiopia. This place holds a record of about 95 degrees Fahrenheit. The temperature remains hot all throughout the year as it is a volcano active area.

The Death Valley is situated in California’s the Mojave Desert. It is one of the hottest areas in North America and the highest temperature recorded at this place is 134 degrees Fahrenheit.