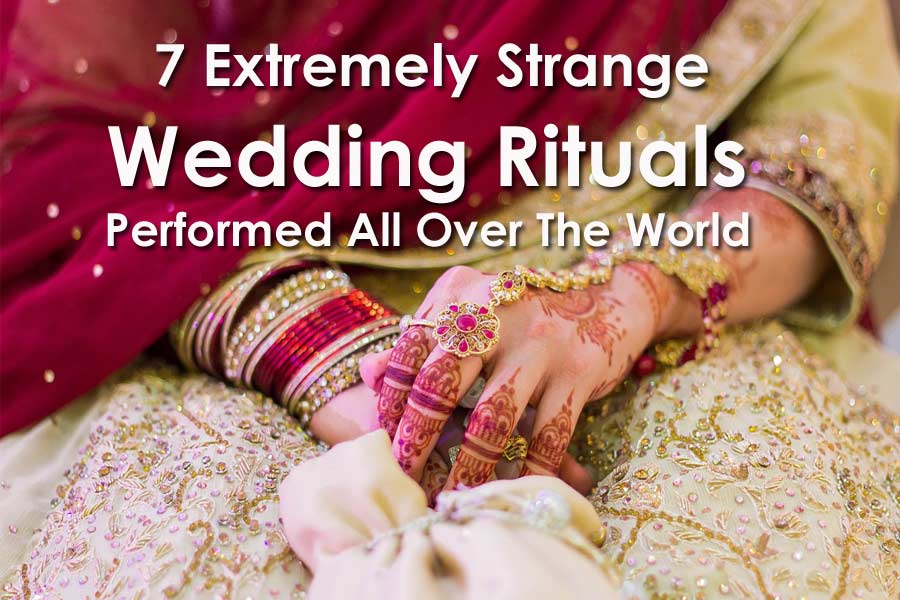 In India, marriages are all about fun besides the traditional customs and rituals that we follow. During weddings, you will find top-notch band Baja Barat, good food, desi dance, cocktails, etc. Every culture celebrates the wedding in their own way. Well, we all are very well aware of the Hindu customs, but do you know about how marriages in other cultures are performed?

Well, the ones which we have mentioned here might give you Goosebumps or may sound a bit weird to you. But we can’t ignore them as well. From twisting grooms ear in Maharashtrian weddings to taking teen phere in Malayali weddings you’ll find it all here.

1. Twisting of groom’s ear by the bride’s brother in Maharashtrian weddings

During a Maharashtrian wedding, bride’s brother twists the ear of the groom. Well, this looks funny but it seems like a warning given to the groom to take care of the bride after getting married.

2. A Bengali mother cannot attend the wedding of her son/daughter

Well, it sounds strange that a mother cannot watch her son or daughter getting married to their love. It is believed that if a mother would watch their wedding it might bring some bad news or may have some harmful effect on the newlyweds.

3. New fishes are released by the couple in the nearest pond in Manipuri weddings

In traditional Manipuri weddings, they follow a unique ritual. The newlyweds are supposed to release two fish in the nearest pond before beginning a new life. It is believed that this move would bring lots of good luck and happiness in their life.

4. Balancing pots on the head of the bride in Bihari weddings

Whoa! It sounds like a tough challenge for a newlywed bride! As per their customs and traditions, the bride is supposed to balance earthen pots on her head while entering the house after getting married. Not only this, but she is also supposed to seek blessings from her elder ones with carrying pots on her head and without letting them fall.

5. Teen ‘Phere’ instead of Saat Phere in Malayali weddings

Till now, we all have heard about Saat Phere or seven rounds which bride and groom take as a part of the wedding formalities. However, in Malayali traditions, the bride and groom are required to take only three rounds around the fire. Look strange right?

6. Bride’s mother pulls the nose of the groom in Gujarati weddings known as Ponkhana or Ponkvu

During Gujarati weddings, mothers-in-law pull the nose of her daughter’s groom in a funny way after performing the ‘aarti’. This playful ceremony is known as Ponkvu or Ponkhana.

7. Presence of white and red flags in Kumaoni weddings

In Kumaoni weddings, they follow a custom where they place flags for both the sides- white flag from the groom’s side which they carry it to the place of the bride which is represented by a red flag.

How to Host The Perfect Dinner Party

Tips on How To Reduce Stress When Planning Your Wedding