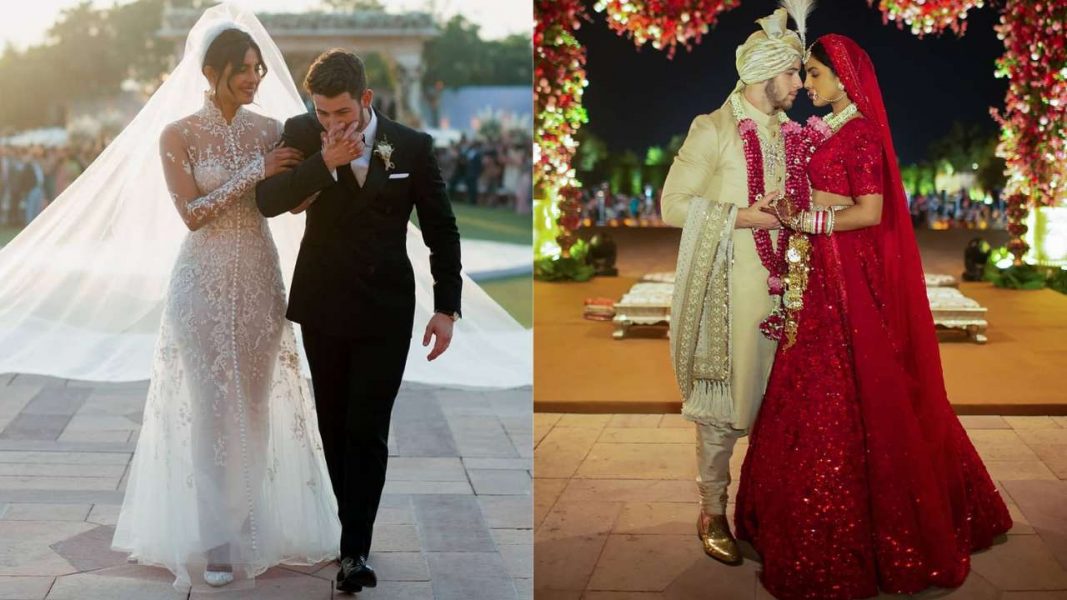 Priyanka Chopra and Nick Jonas tier the knot of marriage on two days simultaneously. They performed their wedding in twp. spectacular ways. one of them was in the style of the bride as the big fat Indian wedding and the other one was a Christiana style wedding. We could clearly see them making the most for both of them in the best ways.

Both the bride and the groom looked so much in love in their photographs, dressed so beautifully and graciously. They have created for us a fairy-tale wedding snapshot album which we can look at forever.

At all the times of the functions and the ceremonies, they were surrounded by the people they loved including their family members, family friends, and so many more. they even invited the prime minister of the country.

All the pictures which have come out from the wedding have come out so perfectly the couple looks so lavish and lost in love the functions took place in the Ubaid Bhawan in Jodhpur and we could breathe in royalty and beauty from the pictures right away starting from the sangeet and the mehndi in the captures.

Their wedding has been a rush ride and areligious and cultural mashup. In one of the captures, you can see how Nick Jonas is holding the hand of his wife Priyanka Chopra and kissing it. it is such an adorable gesture which is delayed right in the photographs.

In the other picture where the bride and groom are dressed as an Indian couple, you can find Priyanka in a red and beautiful lehenga in which she looks extremely subtle yet adorable. You can also see her groom, our Nick jiju in a golden and pale coloured sherwani and he looks a character right out of a royal family of India.

This has made the wedding super successful and even more happening than any other B town wedding. Nick said that he found a lot of things common between his culture and that of PC. He was able to respect both of them due to the amen.

This is because, when it is with the right person, you always know they are the one you want to spend your life with and the same has happened with him and so they are absolutely happy to go about with the wedding as soon as possible for them.

One of the photos also shows how Nick Jonas got all teary when PC walked down the aisle.

10 Reasons To Book A Resort for A Wedding Function

How To Celebrate Your Friend’s Birthday?

How To Have A Fun Sunday Brunch at Home