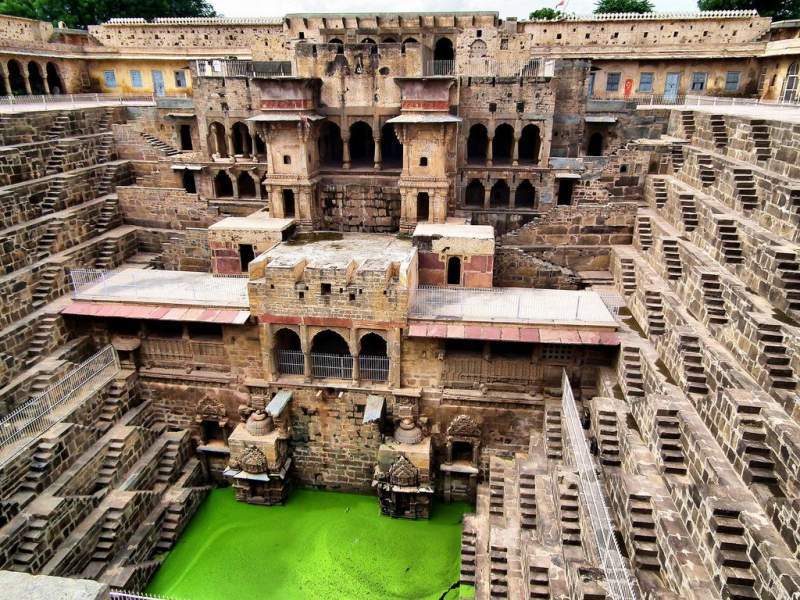 India is home to great culture, delicious cuisines and not to forget those fine architectures that you get to see at heritage monuments. Yes, I am talking about Stepwells or which are popularly known as Baoli, Baori, Bawdi or Pushkarini which were usually man-made. You can find these marvelous architects across places like Rajasthan, Gujarat, Maharashtra or Madhya Pradesh. These were used to store water a long time back in history. Nowadays, they have become tourist sites where people love to visit.

Here is a list of some of the tops Stepwells that are seen across the country. Scroll down to see more.

Adalaj Stepwell is one of the famous Stepwells located in Gujarat. It is a five-storeyed architecture that was built during the 5th-9th centuries. Do you know Adalaj is a small village which is known for its beautiful water tanks? The Adalaj Stepwell also attracts a large number of tourists every year.

You might have heard this name before. It is also popularly known as Neemrana Fort. It was built by the rulers of Neemrana for famine relief. You need to descend around 200 steps if you want to reach at the bottom of the Stepwell to enjoy the cold air inside.

Also read: 6 Hidden Natural Wonders of India That You May Haven’t Heard of

Lakkundi is a village that falls on the way of Hampi, Karnataka. It is well known for its Chalukya-style temples, historic inscriptions and stepped wells. It is just like a hidden gem that you will not find on the tourist map. There are over 100 Stepwells in Lakkundi. Each of them is unique for their architectural beauty.

The name of this Stepwell is due to the foul smell which comes from the water that it contains which is sulfur-rich. It was built back in the 13th century during the reign of the Emperor Iltutmish. This Stepwell is located in Mehrauli, Delhi is five Storeys deep.

This is a three-story Stepwell which is located in Delhi’s Mehrauli Archaeological Park, Rajon ki Baoli. It was built during the reign of Sikandar Lodi in 1516. The Stepwell is a grand structure both in terms of scale and architecture. You will also find a small mosque located next to this Stepwell.

Also read: You Ought to Visit These 8 Places When You are in India

This Stepwell falls under the Archaeological Survey of India’s protected-monuments list. Though it looks beautiful many of them believe this place to be as haunted.

This Stepwell is also known as ‘Queen’s Stepwell,’ which is located in Bundi, Rajasthan. It was named so because it was constructed under Queen Nathavati. It is one of the most famous step-wells and a UNESCO World Heritage Site.

So, which one of you would like to visit?

Also read: 5 Most Beautiful Hidden Gems in India to Visit Before You Die

5 Most Rented Airbnb Homes in Dubai