A Boy’s Friends Stage Mock Funeral After He Gets Committed 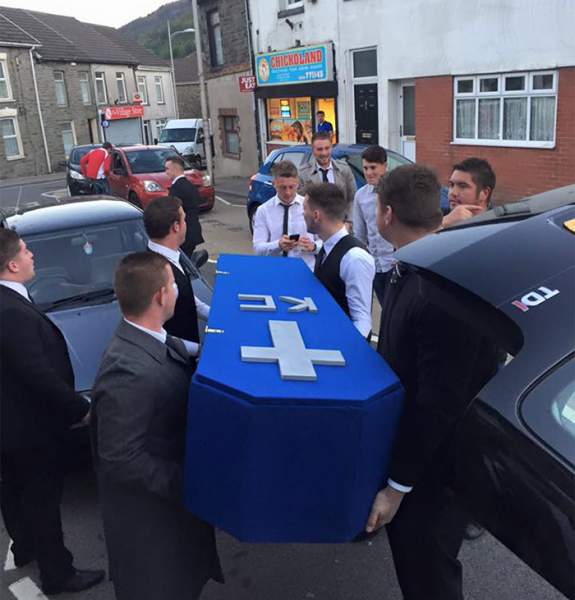 We all have that one friend who chooses to surrender to his/her only relationship with his/her soul mate. We often complain, tease, and make fun of them. But what these group of friends did is epic. The whole story is very amusing and meaningful, too. These legendary friends chose to declare their committed friend dead, for them. And that too literally. They organized a mock funeral service for him and bid the last goodbye to their friend, Keiran Cable. What funnier is the boy did attend his very own funeral service. Read the full story to know what happened.

A group of 50 “lads” threw a funeral for their friend, Keiran Cable, who abandoned their company totally 18 months ago. 20 years old Keiran met his girlfriend, Jess Ferguson, 19, and decided to devote his time to her. His friends would complain that he had stopped being in contact and totally abandoned the group.

It was when Cable, one day, arrived at his local pub in Treorchy, South Wales, to watch the rugby match and discovered that it was his funeral going on in there.

All 50 mourners showed up in the black suit and sang hymns to celebrate his life.

They organized even a vicar, a coffin (handmade) and a hearse as well in order to give a funeral service to their lovely friend, whom they now considered dead.

The organizer said that they call the funeral because they felt that his friend is no more among them after he entered his new relationship with his girlfriend, Jess. “None of us had seen him since then and he wasn’t replying to any of our group texts or emails.” He added.

When they realized that he wasn’t going to come out anyway with them and would pretend as if he was dead then they should organize a funeral for him. And that’s what they did.

His girlfriend though maintains that he can still go out “whenever he likes”. But that’s not what his friends felt anyway, they clearly stated that he just abandoned them and vanished 18 months ago.