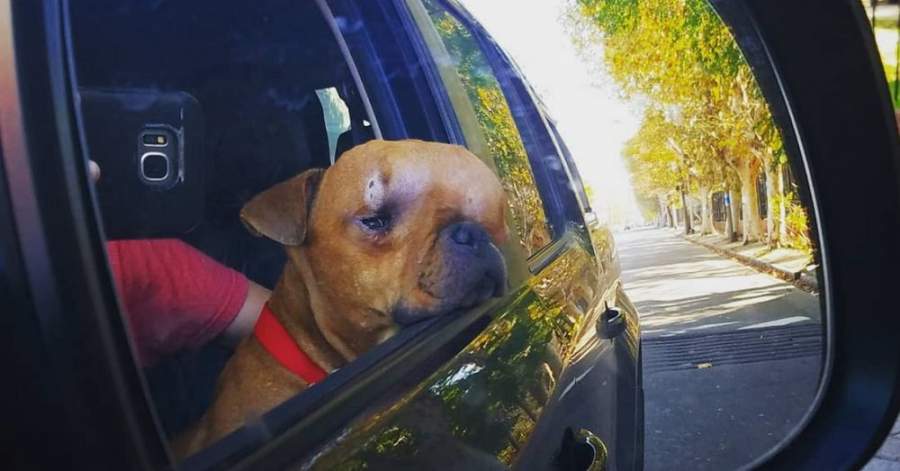 Whether it’s any animal, dogs, cats or something else. They are cute and adorable. They need kind attention and love if they are with you and yes they don’t hurt you like humans. There are so many animals that are dying on roads because they don’t have any shelter or home. They have no owner to take care of them but in this world full of cruelty and selfish people, we have men like Luciano Karosas also who is just 21-years-old who has adopted a dog suffering from a terrible tumour in his head. When asked why did he adopted this dog who is not keeping well?

He replied that he wanted to give unconditional love and life to him in his last days. Well, this is so sad and depressing for those animals that don’t have their own home. But we wanted to thank this guy from Argentina, Luciano Karosas for adopting Thanos and giving him life.

A man from Argentina adopted the suffering dog, Thanos

Twenty-one-year-old, Luciano Karosas from the Atlantic coast city of Berazategui in Buenos Aires, took pity on a sick dog with cancer that had only a short time left to exist on this Earth.

Also read: Internet’s Most Beloved Cat Lil Bub Dies At The Age of 8 Leaving Everyone in Tears

Thanos has a massive tumour on his head

Thanos had a huge tumour growing on his head making his nose look massive and funny. Seeing this terrible condition, Karosas decide to adopt him to give him full live and support to him during his last days.

Also read: Meet B, The World’s First Bee Influencer Who Aims to Save The Entire Bee Community

No one was ready to adopt him

Seeing his condition, he was rejected by four families before going into the right hands. All his previous owners have said that taking care of him for them was quite difficult. Karosas was touched by his condition, it was when he decided to be the home for Thanos. He further reveals that-

“I found it hard to adapt to the idea of ​​how little time we will spend together. I took him to a stem cell veterinarian to see what we could do, looking for a little more hope (which had given him 40 days to live) and told me that there is no treatment that extends that time”.

Unfortunately, Thanos wasn’t getting a positive response from the vets, But Luciano didn’t give up, he decided to give happier moments and love to Thanos in his last days. Giving all the love to him, he felt quite happy and contended and so the doggo. He is pampered like a small kid by him and was taken good care of before he finally passed away.

We all know now what Thanos had been going through but the best part is he was given the best days by this man who deserves the salute from all of us as nobody can do this what he did with full heart and love. May his soul rest in peace.