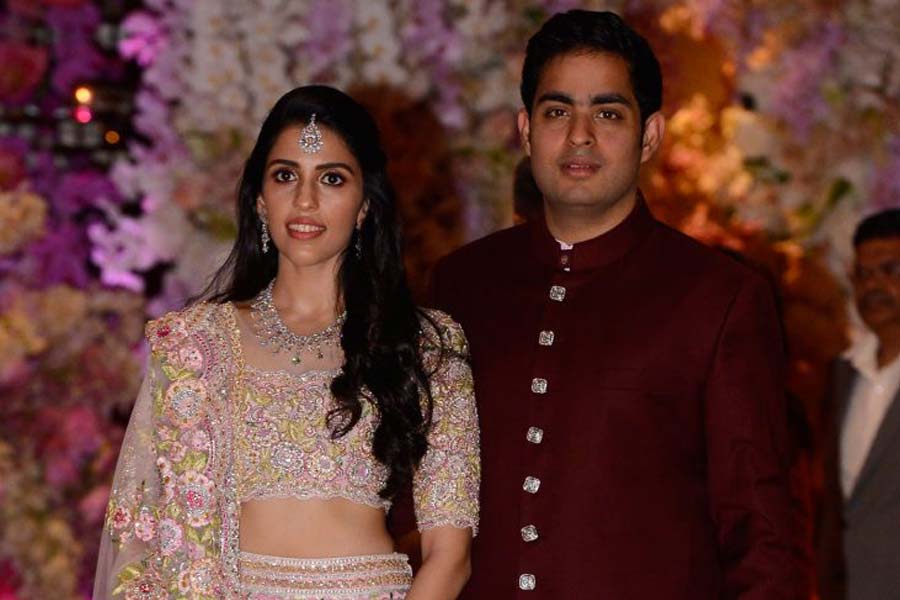 The “Ambanis” who are known for their royal festivities and affairs in the entire world is now preparing for the marriage vows for his oldest son Akash Ambani with the renowned diamond merchant, Russell Mehta’s daughter, Shloka Mehta. The marriage is supposed to happen in Switzerland this 9th of March, 2019. This is another star-studded wedding we are going to witness after watching so many love birds getting married with the love of their life in a royal manner.

As per the media reports, Son Akash Ambani and Shloka Mehta got recently snapped enjoying their pre-wedding bash in Switzerland as they are going to get married on 9th of March and the preparation of the three-day long royal affair has itself begun on 7th and will continue till 10th in full swing.

The Ambani’s also hosted a week-long Anna Seva ceremony ahead of the wedding function where they served dinner to around 2,000 children.

While, during the anna seva, Akash was asked for a solo pose and he blushed to see her soulmate Shloka. The duo was nicely dressed together.

Akash was dressed in a teal green coloured kurta with Nehru jacket over it while Shloka Choose to wear heavy pink embroidered lehenga for this ceremony. Akash also confessed that Shloka gets nervous in front of cameras when get clicked.

Isha Ambani’s wedding was no less than a royal affair which took place at their Mumbai residence Antilia on 12th December 2018 with the presence of nearly all the Bollywood stars and other prominent personalities in the country and from abroad.

And that’s not all, when Akash was asked for a solo picture he replied to the photographers in the way” Shaadi ho Raha Hai. Birthday Nahi Hai. Do body, ek soul ho Gaya hai which seems to be quite humorous as well as funny.

A post shared by Uttara Shah Invitations (@uttarashah.wedding.invitations) on Mar 5, 2019 at 6:28am PST

Recently the couple had also celebrated the most royal pre-wedding bash in Mumbai with a Harry Potter Theme which almost looked like a dream to most of us.

The latest video of their celebration has also made a buzz over social media among the followers a few days ago. While the expected guest list for their wedding would be the same as of Isha and Anand Piramal’s wedding.

Akash-Shloka’s wedding ceremonies will be a three-day affair:

The duo will tie the knot in an opulent ceremony on March 9th, 2019 at the Jio World Center in Bandra Kurla Complex, Mumbai. Their wedding function will be followed by Mangal Parv on March 10th.

Meanwhile, they are also planning for their wedding reception on March 11th that will be marked by the presence of Bollywood who’s who. Well, it is quite true that Ambani’s never fail to leave any stone unturned when it comes to celebrating festivities that looks like almost a fairytale for most of us.