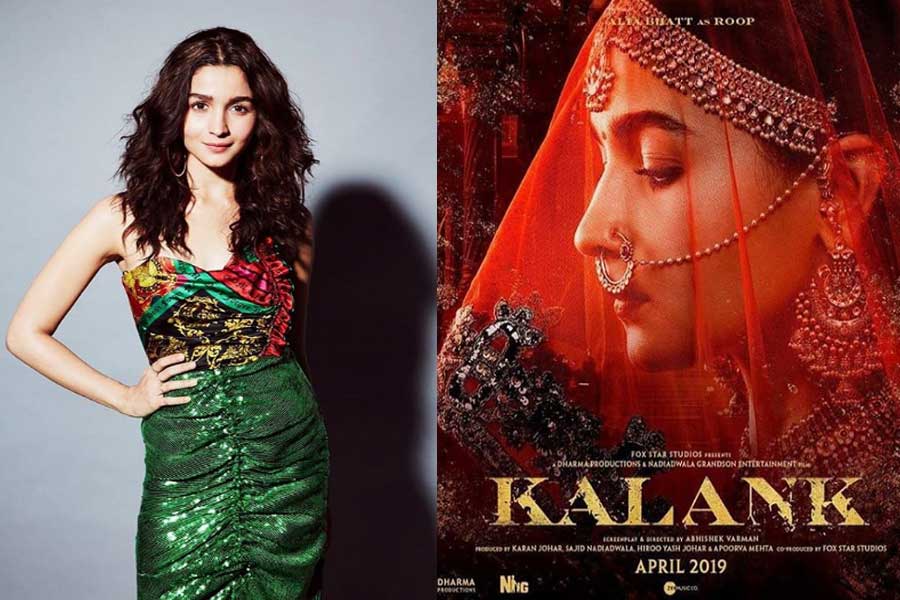 Alia Bhatt is known to be one of the finest actors from Bollywood. She has played splendid roles belonging to different characters on the silver screen. After watching her in the latest hit movies like “Raazi” and “Gully Boy”, Alia Bhatt is going to be seen in the next blockbuster release “Kalank” which is supposed to be directed by Abhishek Varman. The film is slated to release on April 19 this year.

On International Women’s Day, Karan Johar has unveiled the latest poster of the movie “Kalank” which has created a much buzz among the fans over the Internet.

The makers of the film have released the character posters of #WomenOfKalank after Varun Dhawan, Sanjay Dutt and Aditya Roy Kapur and guys Alia look splendid in the poster. She looked exactly like Deepika Padukone from Sanjay Leela Bhansali’s hits “Padmaavat”.

If we talk about the poster, the image will remind you of Deepika Padukone from Padmaavat. Alia is wearing a typical red ensemble along with heavy ethnic jewellery and her face is being covered in a net veil which has made her appearance none other than a royal bahu.

After the poster got released, netizens are having a fun time comparing her from Mastani of Bollywood. Many of her fans have praised Alia for her ravishing look as we can see from their comments and the way they are comparing from other Bollywood diva, Deepika.

The movie “Kalank” has been produced by Karan Johar and Sajid Nadiadwala, the movie is said to be based on the 40s. After having a look at this mind blowing poster of Alia’s from the movie as her character “Roop”.

We now can’t wait much for the character posters of other stars from the same movie. Yes, we are talking about Sonakshi Sinha and Madhuri Dixit.

Madhuri Dixit described Alia’s character as, “She’s full of life and has a heart of gold”. Meanwhile, Karan Johar also tweeted describing her as Roop, “To love her is to love fire.” Well, it seems that they over her appearance a lot by putting the comments like this on social media.

On seeing this, Alia also couldn’t resist herself and then she replied about playing this character of “Roop”. Alia said, “A character like this (as Roop in Kalank) I have never played unlike others till now”! Presenting Roop! #WomenOfKalank #Kalank,” she wrote on Twitter.

We have also noticed comments like “For a moment I thought its Deepika” drawing users to compare between Alia and Deepika’s looks in Kalank and Padmaavat respectively.

Recently in an event, Alia Bhatt said “Kalank is an unbelievable journey for her. I am quite excited to play this upcoming role in my career.

It is an honor to be a part of such a great cast and she had also mentioned that she as well as her film’s director Abhishek Varman who is a very dear friend of her, we all had put a lot of efforts and hard work for this one.”

Zafar is the storm.
Roop is the fire.
Dev is the calm.
Satya is the grace.
Balraj is the king.
Bahaar is the enchantress.#Kalank pic.twitter.com/lnetoxATwC

This one is only glimpse of #kalank first look will be revealed tomorrow with full starcast. pic.twitter.com/oArlFQjsrP

RT for Deepika As Padmavati

Like for Alia As Roop ?#Kalank #AliaBhatt #DeepikaPadukone #Roop pic.twitter.com/Nkib7js9CS