Be A Part of the Journey of Lord Jagannath, in Maha Rath Yatra, Puri Odisha from July 4th to 15th 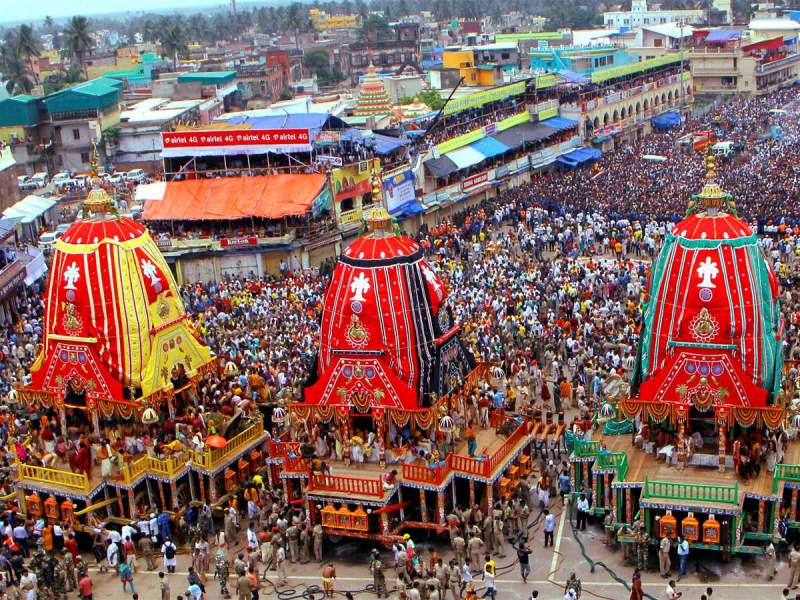 India is a country of diversity. It is diverse in culture, religion, political views, etc. The country celebrates many different festivals throughout the year. Some of the festivals are so grandly celebrated that people gather to witness not just across the state, or country but the entire globe. One such auspicious festival is Jagannath Rath Yatra, in Puri.

The festival is about the public procession of deities Jagannath (Vishnu avatar), Balabhadra (his brother), Subhadra(his sister) and Chakra. The festival is celebrated mainly in Puri, Orissa but the people of all the other states love to peek at this auspicious yatra of their lords.

Be a part of this fabulous festival of joy, faith, and celebration. Join the iconic Rath Yatra of Lord of Lords, Lord Jagannath in Puri, Bhubaneswar:

Every year the festival for Ratha Yatra is celebrated with equal excitement, it is celebrated in the month of monsoon (which is July mostly). This year the propitious festival is being celebrated for July 4th to 15th of July. Devotees from across the globe travel to Puri, Odisha in order to be part of the biggest Ratha Yatra. It is believed that those lucky people, who attend Ratha Yatra gets moksha and goes to heaven.

Ratha Yatra starts from the main temple where the deities of Jagannath, his elder brother Balabhadra and younger sister Subhadra are taken out in a procession to Gundicha Temple and remain there for nine days. They also pay a visit to their mausi at the Mausi Maa Temple. They are also accompanied by the iconic weapon on Lord Vishnu, Sudarshana chakra. Then the deities (Ratha Yatra) return to the Main temple. While going to the Gundicha is called Rathajatra returning back to the of Jagannath Ratha Jatra is known as Bahuda Jatra.

The crowd at the streets are undeniably huge and it seems that whole India has come down on the street to be part of the Yatra. People try to be able to as close to the chariot as possible as they believe they are not the deities that are traveling on chariot but the lords themselves. Everyone wants to catch glimpses of the deities. It is also believed that pulling the chariot is a great fortune and people actually travel from different part of the country to pull the chariot for the rope.

The three chariots resemble identically to the temple are pulled through the streets of Puri called Badadanda. The decorative chariots are pulled mainly by the priest and devotees take turns in between to help the priest throughout the 2 km journey. The procession is accompanied by the joyous beating of drums, aatris, and dancing. It is a festival of celebration, people totally lock their houses and business throughout the course of the eleven days. The only thing that happened in Puri this time is the Ratha Yatra. It seems like an array of Hindu festivals altogether.

When the deities return there is a small play that people enact. Wife of Lord Vishnu doesn’t allow him to return to the temple as she is accusing him of being away from her without informing her about the journey and then Lord offers him sweets and she gradually submits to Lord’s charm.

Every the same process is repeated without the slightest change yet devotees are excited every year as if they are witnessing it the first time. If you ever plan to visit Puri this is the best time to visit the place. To reach there one can hire a cab from Bhubaneswar which is connected by airport an railway, too.