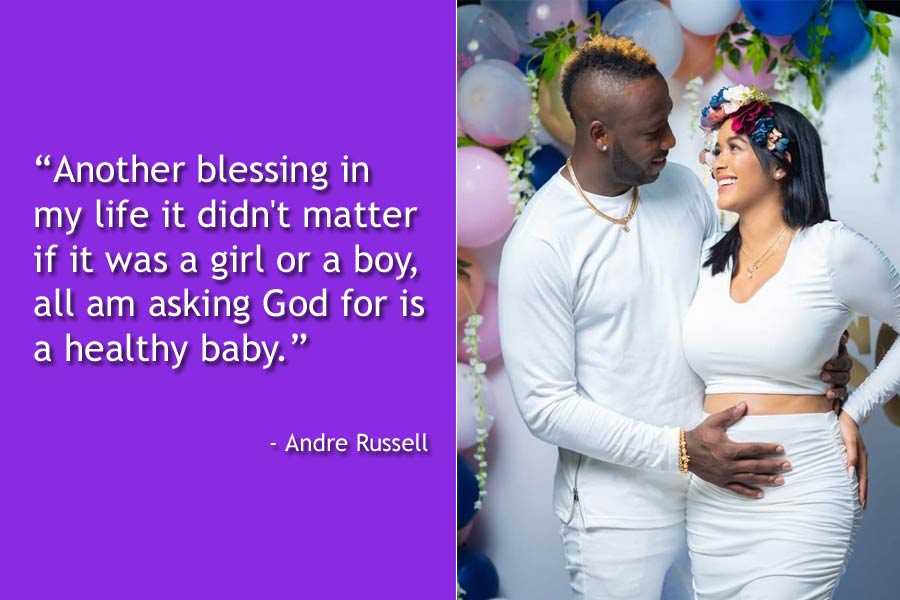 Fans and netizens are getting mad after hearing the arrival of the first baby of the very renowned star West Indies Cricketer, Andre Russell and his wife, Jassym Lora. They are expecting their first baby and the duo have announced the arrival of their baby in a brand new style which is awesome and everyone is loving their unique style. The couple has dated each other for long two years and they have tied the knot in 2016. The couple also had posted heartfelt pictures and videos on their social media handle which shows the love and care for each other.

Andre has broken this pregnancy news to his closed ones. He shared a short video in which he could be seen holding a bat and his wife Lora is seen throwing a big white ball to him. His wife bowled an under-arm ball that bursts into a pink smoke indicating that it’s a baby girl during a party at Jamaica recently.

Russell uploaded the short video on his Instagram handle

He shared this special moment with his loved ones. He captioned the video, “So its #GIRL another blessing in my life it didn’t matter if it was a girl or a boy, all am asking God for is a healthy baby #babyrussell,”

As soon as he posted the video for the upcoming baby, the video went viral all over the social media with his fans and well-wishers congratulating the couple and showing their love to them.

Andre and his wife, Jassym Lora shares a beautiful bond with each other. Jassym has travelled a lot with Russell overseas for her husband’s cricket assignments. A few months back she was in India when her husband plied his trade for the Kolkata Knight Riders (KKR) in the Indian Premier League (IPL). Russell always finds her motivating when he sees her standing in the crowd and cheering for him, he told.

Recently on April 29, Russell has turned 31st and has celebrated her grand birthday with the KKR players along with his wife.

We are hoping they have a great future ahead and hope Lora to be fine after delivering her first baby. We wish the couple al the best for the future endeavors. Not to forget the baby as his daddy said, whatever gender it is, he/she should be fit and fine.

We are absolutely loving the concept that they used to reveal the gender of the child which I think no one had ever done like this before. This is why fans and netizens are going mad about the news they shared.

Also read: 8 Myths and Misconceptions About Pregnancy That You Should Not Believe