A Big Lesson For all The Retailers! Bata Has Been Fined Rs. 9,000 on Forcing The Customer To Pay Rs. 3 for a Paper Bag 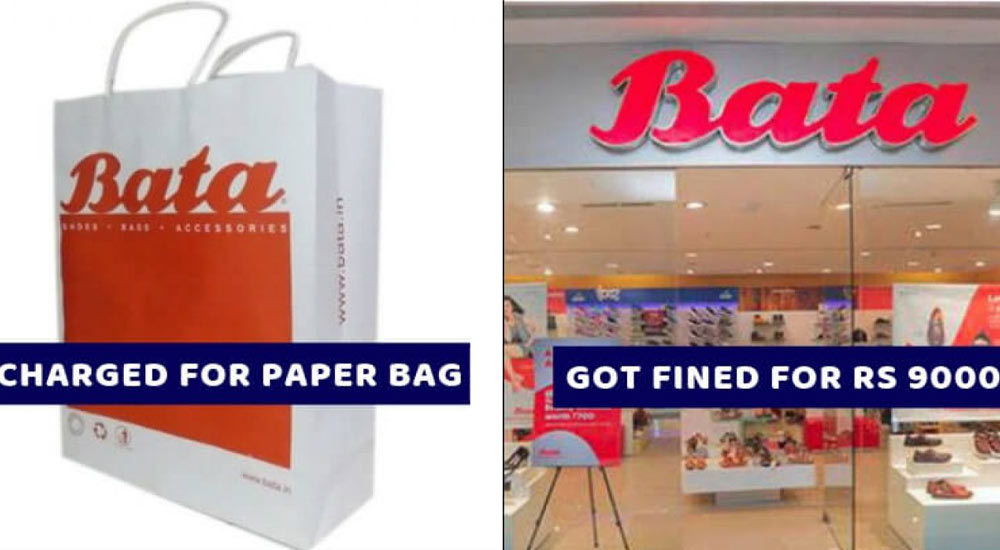 One question, “Sir Apko carry bag chahiye?” must sound very familiar to all of you Right? This is one of the most common questions asked to you by the executives at the billing desks of a store when you go shopping. And I bet, almost everyone has must experience this situation once in life.

Big retailers like Big Bazaar, Reliance, Pantaloons, Shoppers Stop and many other giant brands never miss the opportunity to charge for a small paper bag for keeping the stuff you have purchased from them.

But, after a tight slap of Rs. 9,000 on the footwear company, Bata by the Consumer Forum other retailers will be forced to think twice before asking or forcing its customers to pay for a paper bag while doing shopping.

Let’s talk about the whole incident

One of the most renowned shoemakers, Bata has been fined an amount of Rs, 9,000 for charging a small amount of Rs. 3 for a paper bag from its customer. A customer, Dinesh Prasad Raturi who hails from Chandigarh was given a total bill of Rs. 402 which also included paper bag charges when he bought a pair of shoes from the store located in the sector 22D.

According to him, he found this practice of charging for a paper bag is unethical. So, he went straight to the consumer forum and lodged a complaint against the brand for charging him money for the bag.

He further told that Bata was endorsing its brand on the paper bag which is totally unfair and therefore he decided to ask for a refund of Rs. 3 with compensation from the executive.

On listening to the plea of the customer, the consumer forum has directed Bata India Limited to pay back Rs. 3,000 to Raturi for the problem he has faced due to the deficiency in their services.

Also, they were asked to refund the amount of Rs.3 that was asked by him to pay for a paper bag along with litigation charges, i.e. Rs. 1,000.

On seeing all this, Bata has countered the charges, the consumer forum has also said that if the brand is really concerned towards the environment then they would have provided free paper bags to the customers.

Now, this Bata incident is giving strict warning to all the other retailers or big brands who are charging unnecessary for a paper bag from their customers. And hats off to the guy who took this matter straight away to the court otherwise it would never have come in front of us. Take note, folks!

But carry bags are charged everywhere…and they say it a universal policy …I happened to ask a big bazar staff #bata pic.twitter.com/doQ0SJfzy7

#Bata continues to charge for carry bags even after C’garh store incident, happened with me yday & the staff knew all about it when I raised this. Issue is not about awareness among consumers, but among retailers. Is there a legal basis to this so that there’s no confrontation?

Appreciate the person. I argued the same. But being mechanical in life didn’t bother to do extra that one step in teaching BATA a lesson. Every penny worth’s ??#BATA https://t.co/61xWkWSs31

#DMart is still charging for carry bags; when #bata has been fined by consumer forum for doing so. No lesson learnt from the case. How’s #DMart asking the customers to pay charges for carry bags when we are advertising for them having the carry bags in our hand. #shameondmart