Big B Completes Great 50 Years in Bollywood, Son Abhishek Pens Down Emotional Note for Him 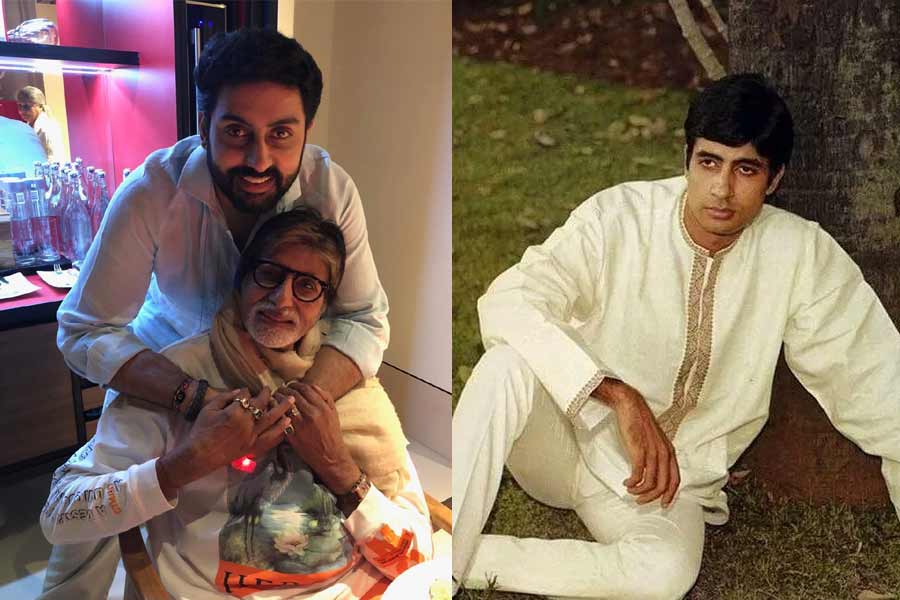 One of the very popular names in our Bollywood cinema, Amitabh Bachchan who is known by different names like Shehenshah, Big B, Bachchan Sahab, etc. He has recently completed his 50 successful years with the Indian Cinema. Not only is he a great actor he is also a wonderful host, singer, poet as well as a dancer. He also has won many awards and accolades for his wonderful contribution to the Indian Cinema and we all know that. Some of the popular movies by him include Baghban, Dewar, Zanzeer, Sholay, etc which we will forever remain in our hearts.

Big B has made his acting debut in 1969 with the film Saat Hindustani that got released on 7 November, 50 years ago. Till then he has ruled the world of Bollywood like no other actor did till now. No one can ever forget his iconic roles and his charismatic personality.

To this end, his son who is ‘Guru’ megastar, Abhishek Bachchan has penned down the heartwarming note for his father to celebrate his cinematic contribution and posted it on the Instagram handle.

“Not just as a son, but as an actor and a fan… We are all blessed to witness greatness! There is so much to admire, to learn and even more to appreciate. Several generations of cinema lovers get to say we lived in the times of BACHCHAN!!! Congratulations Pa on completing 50 years in the Film industry. We now await the next 50! Love you,” he wrote.

Not just as a son, but as an actor and a fan… We are all blessed to witness greatness! There is so much to admire, to learn and even more to appreciate. Several generations of cinema lovers get to say we lived in the times of BACHCHAN!!! Congratulations Pa on completing 50 years in the Film industry. We now await the next 50! Love you. #50yrsofSaatHindustaani #50yrsofBachchan #GiveItUpForBachchan

In the movie Saat Hindustani, Big B has played the role of an Indian war-prisoner and Islamic poet. Beside him, actors including Utpal Dutt, Madhu, and AK Hangal were also seen in the movie.

Also read: Glimpse at The First Look of Amitabh Bachchan in His Much Awaited Movie “Gulabo Sitabo”

Big B left his low paying job for Saat Hindustani

Do you know Amitabh Bachchan has left his Rs. 1,600 paying job in Kolkata to become part of this movie? He has also received Rs. 5,000 for this movie.

Now he is at the age of 77, no other actor like him comes up with movies like he did in a year. According to sources, he will be next seen in Gulabo Sitabo, with Ayushmann Khurrana and Brahmastra, with Ranbir Kapoor and his beau Alia Bhatt.

We all want to congratulate Amitabh Bachchan sir on completing successful 50 years in the Bollywood industry and entertaining us all throughout!

Also read: Big B Likely To Play An Iconic Role Of A Transgender in Kanchana Hindi Remake

It’s been #50yrsofsaathindustaani & congratulations to @amitabhbachchan ji for completing 50 years in the Indian film industry. Here’s to many more years of #Bachchan ?✨ You are a true legend… P.S: I’ve been waiting to post this photo of me holding… https://t.co/3YcR0Bmffc pic.twitter.com/IWaE5q3Aju

Congratulations on completing 50 yrs in #Bollywood #Indiancinema will always be greatful to you @SrBachchan
Love you to no limits!#50yrsofSaatHindustaani#50yrsofBachchan#GiveItUpForBachchan pic.twitter.com/bQemjvzaXy

Congratulations @SrBachchan ji on completing 50 yrs in Film industry and still counting.
You are an inspiring actor to all the movie lovers, and present actors. GOD bless you with good health and lots of STRENGTH ?❤??#50yrsofBachchan #50yrsofSaatHindustaani #amitabhbachan pic.twitter.com/KzsIVPTDz6