Simplicity in The Personality: Billionaire Bill Gates Waiting in Line For a Burger Just Like a Common Man 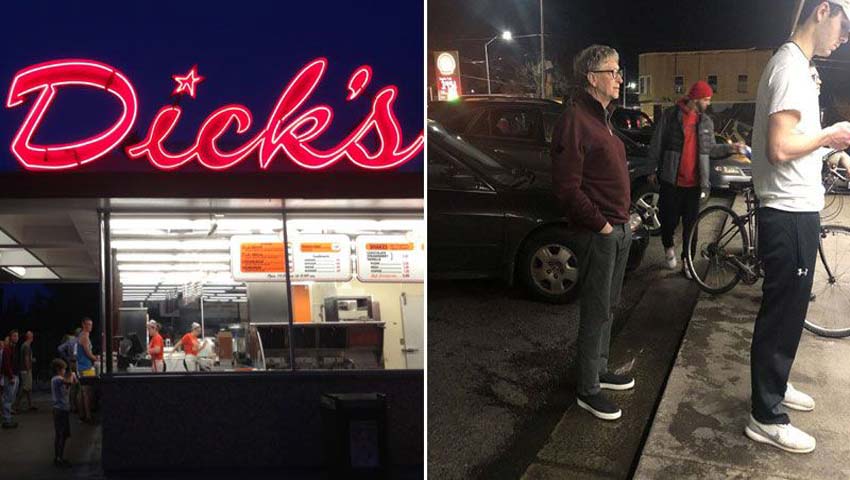 Well, the richest man in the Planet Earth may have access to all the worldly riches but then he is the most humble and modest person you will come across to. He is a billionaire not only from the point of view of finances but also from hearts.

Nothing special, just a guy with a fortune of $90 billion standing in line for burgers. #billgates

This picture has gone viral and sees him standing out of the fast-food chain in us. He leads a normal life and this picture just proves this fact. Dressed in casuals waiting for the burger this man makes us smile.

#BillGates, worth 95 Billion Dollars, can buy all the burger companies in the world. Yet, he queues for his burger. Whom does he have to impress? pic.twitter.com/a2HMFHQrE4

“When you’re worth about $100,000,000,000, run the largest charity in the history of the world and stand in line for a burger, fries and Coke at Dick’s like the rest of us…”#BillGates pic.twitter.com/GKNdBmkkiC

@BillGates ? Respect from India.
one of the richest person on the Globe standing in line to get a burger.
A person down to earth.@Microsoft #BillGates pic.twitter.com/39jCiUkQO4

#BillGates waiting for his burger in line in a #humble way while his philanthropic organisation has helped reduce children birth deaths in poor countries and tackled other deseases using multi billion investments.
I hope other business #leaders learn & apply, #respect @BillGates pic.twitter.com/R5YwbhvJkq

Tags: Bill Gates Waits in Line For a BurgerSimplicity in The Personality
ADVERTISEMENT