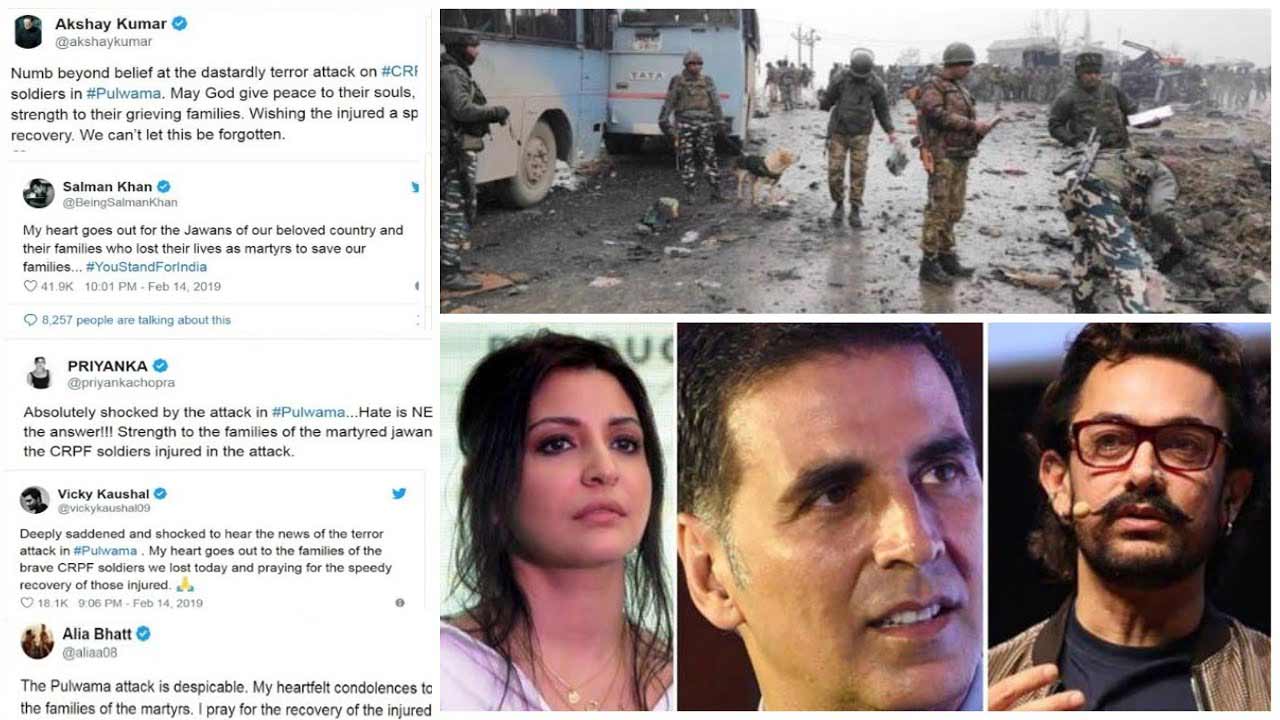 Valentine’s Day is the day of Love. This day turned out to be the bloodshed day for all Indians. Pulwama Kashmir attacks devastated the nation & also Ithe Indian Army. There is an aura of grief, aura & outrage within Indian to kill Pakistan at any cost. Indian Government will take serious steps to take #Revenge & is still working hard to do so. The terrorists carried more than 350 kgs of explosives were used to kill the Indian Army.

Bollywood actors are giving condolences to the Indian Army.

Shameful shocking reprehensible . Absolute act of cowardice. Perpetrators of this heinous crime cannot be be friends with people of Kashmir. We stand by the bereaved families.

Such terrible news coming from #Pulwama. Today when people are celebrating love, hate raises it’s ugly head too. My thoughts and prayers for the martyrs and their families.

The #PulwamaTerrorAttack is a cowardly attack on our soldiers. Heart goes out to our heroes saving our country who have to face an enemy who will hide and attack.

Heartbreaking & devastatingly shocking. To resort to such measures & kill people. Praying for the families of our hero soldiers who lost their lives #PulwamaAttack

What a deeply sad and dark day… Shocked and pained by the dastardly attack on our CRPF convoy. My heart is with the families of our jawans… my deepest condolences ?? #PulawamaTerrorAttack

What a dark dark day.. Can’t stop thinking of the mindless violence, evil hate & sinister politics that has killed 40 working class bravehearts today.. Thinking of their bereaved families. May they find the strength to deal with this cruel tragedy. Prayers. #PulawamaTerrorAttack https://t.co/CAvjFIL2jt

Absolutely shocked by the attack in #Pulwama…Hate is NEVER the answer!!! Strength to the families of the martyred jawans and the CRPF soldiers injured in the attack.

The Pulwama attack is despicable. My heartfelt condolences to the families of the martyrs. I pray for the recovery of the injured.

Numb beyond belief at the dastardly terror attack on #CRPF soldiers in #Pulwama. May God give peace to their souls, and strength to their grieving families. Wishing the injured a speedy recovery. We can’t let this be forgotten.

#Pulwama Who are these people who are celebrating a win after this dastardly and cowardly attack..is just condemning this enough..wipe out not just their smiles but their faces.. show us our revenge, instill dismay and dread with the retaliation.??

Just learnt of the horrific and cowardly terror attack in Pulwama. Disgusted and saddened.
United in grief with families of the CRPF jawans who lost their lives. My deepest condolences to them.