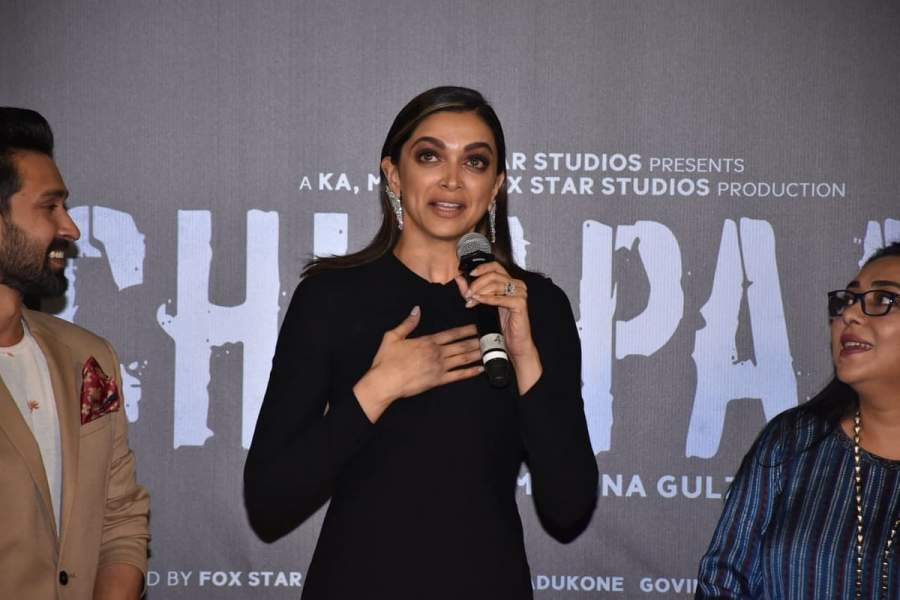 Deepika is an all-rounder and we all know that. Till now, she has done so many hit movies like Padmaavat, Bajirao Mastani, Piku and many more. Now, after a span of two years, she is again going to make one of the biopics ‘Chhaapaak’ where she will be playing the role of an acid attack survivor. The movie is based on a real-life story where Deepika would be playing the role of ‘Malti’ and opposite to Vikrant Massey who is playing as Amol.

If you have seen its trailer, it will leave you uneasy and inspired. The first look of Deepika got released a few months ago where some of her photos got leaked.

Now the trailer of the movie has been released and the fans have got the idea about the movie. The trailer begins with the protest for Malti before the trailer gives a glimpse of her in the hospital soon after the attack takes place. Eventually, the trailer wants to show Malt’s new face after she got attacked.

Her struggle to fight with the situation and her new scary face that she is going to see now. In the trailer, you will also notice Vikrant Massey, who is the social activist is also introduced, he is the man who stands against Malti’s fight. The trailer ends up with the hope that Laxmi would get the victory over the struggle she has faced.

Deepika was in tears while the movie’s trailer launch

Well, it seems easy to us, but it is not at all easy to do what Deepika is about to do. She is portraying the life of an acid attack survivor, which isn’t easy. Therefore she broke into tears while the movie’s trailer launch.

Well, the tears in her eyes explain how badly she is touched by Laxmi’s real-life story and at the same time it is very challenging for her to act this role which she has never done before.

Deepika calls ‘Chhaapaak’ as the most special film of her career

Deepika admitted that Chhaapaak is the most special film of her career. Through this movie, she wants to convey that people should connect to the message that the movie wants to give.

The survivors also need to be treated well in society, they should not be viewed as scary or disabled. The movie has been directed by Meghna Gulzar and the movie is slated to be released on January 10, 2020.

We wish all the very best to Deepika Padukone for her upcoming movie. We know she will rock it and we just can’t wait to see her acting in this movie.

Check out a few Twitter reactions about the movie:

Mind blowing ??? #ChhapaakTrailer
Inspiring story of an acid attack cictim literally gave me goosebumps. ❤@deepikapadukone is going to give best performance of her career with this role.
mark my words, all best actress awards next year wil be for my queen ??❤ pic.twitter.com/pRWrGfhUG3

THERE’S FAITH THAT SHE WON’T DISAPPOINT AND SHE DOESN’T#ChhapaakTrailer pic.twitter.com/wBTCrP577y

Mind blowing ??? #ChhapaakTrailer
Inspiring story of an acid attack cictim literally gave me goosebumps. ❤@deepikapadukone is going to give best performance of her career with this role.
mark my words, all best actress awards next year wil be for my queen ??❤ pic.twitter.com/pRWrGfhUG3

Omg the only thing ill say after watching this is @deepikapadukone @meghnagulzar respect to both of u, lot of gratitude for making this film, its needed And much more power to these women. ?@foxstarhindi ⁦@masseysahib⁩ #ChhapaakTrailer https://t.co/57Ia8uXnYm

Deepika’s genius isn’t just visible in the breakdown scene, but the little gestures she does…The flinch when the child screams at her, how she looks at her distressed father, how her body language gradually changes throughout…Brilliant stuff #ChhapaakTrailer

That’s a first time! @deepikapadukone we’re so so so proud of you – An actor, model, philanthropist, inspiration to millions, and now a PRODUCER. You’re absolutely amazing #ChhapaakTrailer pic.twitter.com/iwbbvvQ8fa

Also read: Glimpse at The First Look of Amitabh Bachchan in His Much Awaited Movie “Gulabo Sitabo”