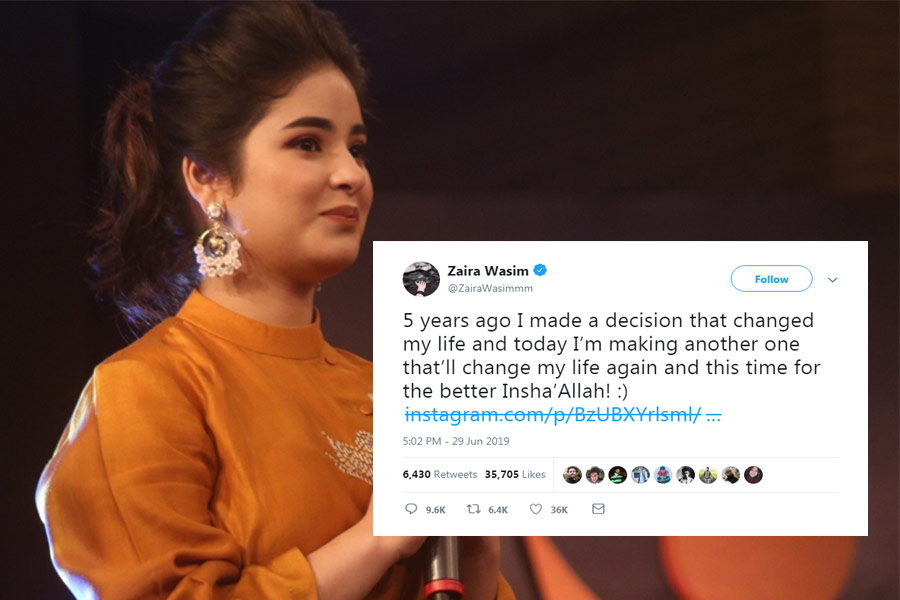 It is very rare that we get to hear that a star is taking retirement from the B-Town, we have great actors like Mr. Amitabh Bachchan who are still giving us hits in this age with no sign of retirement. At the one hand where we have an example of Big B, we are bound to be taken aback with the news of some very young and talented ‘Super Star’ retiring from Bollywood.

Zaria Wasims who shot to fame for the character she played of the childhood of Geeta Phogat, has shocked the world with a very surprising announcement on social media about her quitting Bollywood.

The sole reason behind her quitting is her religious belief that was hindered by her acting career.

Zaira Wasim is known for some remarkable work that she has done in Bollywood in the past few years. The young artist played the character of Geeta Phogat’s childhood in Amir Khan starrer super hit movie Dangal. And again gained popularity for her movie Super Star where is played the role of a young and aspiring Youtuber who struggled to come out in the world due to his Muslim conservative father.

But this time Zaira is making headlines for completely different reasons. Recently Zaira announced on Twitter that she will longer be working as an actor and will retire for Bollywood as her career has caused hindrance in her religion. It shocked a million of people and her fans as the 18 years old rising star called it quit quite early in her career.

In her heartfelt post on Twitter Zaira writes that she was unable to cope up with her lifestyle due to an acting career and her religious belief. She writes

“5 years ago I made a decision that changed my life forever. as I stepped my foot in Bollywood, it opened doors of massive popularity for me. I started to become the prime candidate of public attention, I was projected as the gospel of the idea of success and was often identified as a role model for the youth. However, that’s never something that I set out to do or become, especially with regards to my idea of success and failure, which I just started to explore and understand”

5 years ago I made a decision that changed my life and today I’m making another one that’ll change my life again and this time for the better Insha’Allah! 🙂 https://t.co/ejgKdViGmD

“For a very long time now it has felt like I have struggled to become someone else. As I had just started to explore and make sense of the things to which I dedicated my time, efforts and emotions are tried to grab hold of a new lifestyle, it was only for me to realize that though I may fit here perfectly, I do not belong here.”

“This field indeed brought a lot of love, support and applaud my way, but what it also did was to lead me to a path of ignorance, as I silently and unconsciously transitioned out of Imaan. While I continued to work in an environment that consistently interferes with my Imaan, my relationship with my religion was threatened”

We all should stand by Zaira as she has made a decision that is based on her inner happiness, she is a religious person which is a good thing and nobody should interfere in her decision.

However, It is hard to believe that Zaira who played the similar role in the Super Star where she played a role of a girl who wanted to be a singer fighting against the religious belief, is actually about to do something opposite than that.

Well, as we always say reel life is different than real life. If she found her happiness in her religion than so be it.