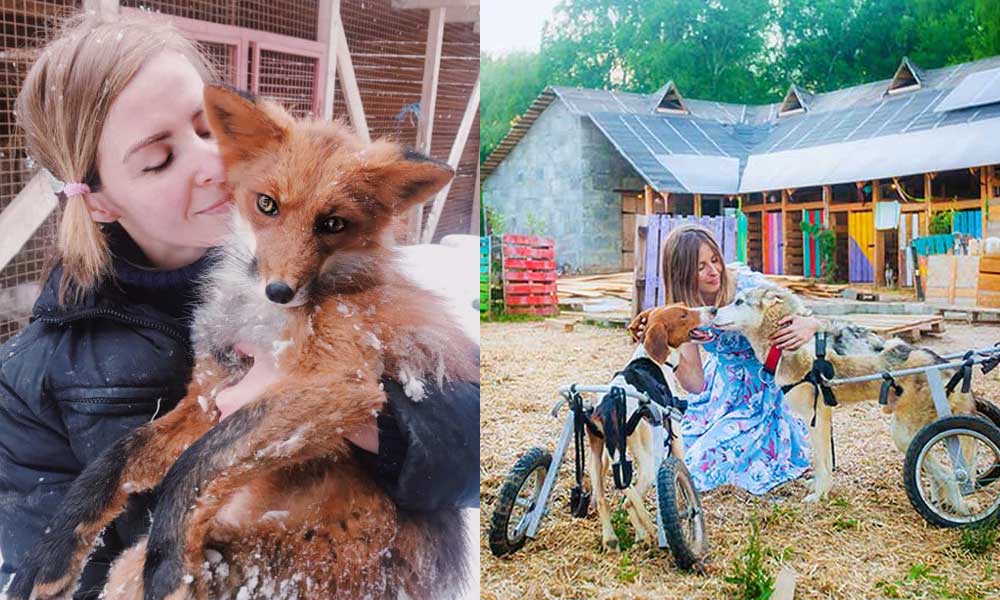 The very famous Russian photographer ends her career to spend her life in the forest with 100 sick dogs. At times to find the real you, all that you need to do is simply lose yourself. Daria Pushkareva was a successful photographer in Moscow. She was the workaholic one and this attitude of hers brought her more miseries rather than happiness. She was not contented and therefore was never at peace. Things began to change as she started to spend money and time for the animals in need.

She was the top photographer and had also worked for 6 years in moviemaking. She has majorly contributed to creating TV films and series and also full-length features. Her work schedule exhausted her, as it was required that she works for 15-hour long shifts that too without taking a day off in two weeks.

“I was one of the top five Moscow wedding photographers,” Daria Pushkareva told in an interview “My clients were, for the most part, elite businessmen and politicians.

Very intelligent and very cultured; they’ve definitely changed my perception of wealthy Russian people for the better.” She entered the world of photography as she wanted to break the high intensity of her work.

Daria Pushkareva with her dogs

She invested all her money in photo equipment and taking master classes for getting perfection in her skills. Even changing the field did not solve the reason rather her work life and schedule remained the same.

There was no time to rest or enjoy a holiday. She had closed herself at work and started to enjoy only producing impressive photographs. She was workaholic and realized she was happy only when she was creating something new.

As a child she wanted to run a dog shelter, her mother was a single parent and worked really hard to make the ends meet and thus in her growing up years she never had a dog. It was only when she started movie-making that she got involved with dogs. She stated to aid the dogs.

She donated money and on an internet forum, she volunteered to manage things like finding dog therapy, accommodation for them, and raising funds for them. She was too busy with work and this was all that she could do.

The life-changing moment came when she met saw an article about a shelter puppy without an eye. The pup needed 10K rubles to book the ophthalmologist. She made the payment of the amount but the person told her that “ Thank you, but we can’t take her to the vet. There’s no one to do it right now.”

She was sitting with her husband and they decided that they would do it themselves. That point of time changed everything and they got a clear perception of everything. The owner of the shelter placed the flea-bitten puppy in her lap and then the things were crystal clear.

After this, they started to rescue the dogs. The journey was difficult there were dogs who needed constant and she was not able to leave home even for shooting.

It was difficult to keep the dogs at home and then they decided to take a loan and buy a country house that is 160kms away from Moscow. They moved there with their dogs and now are living an entirely different life. This she calls her new home and the dogs are her family members