Dhoni Slays It Again in 3rd ODI: Nobody can Beat Mahendra Singh Dhoni 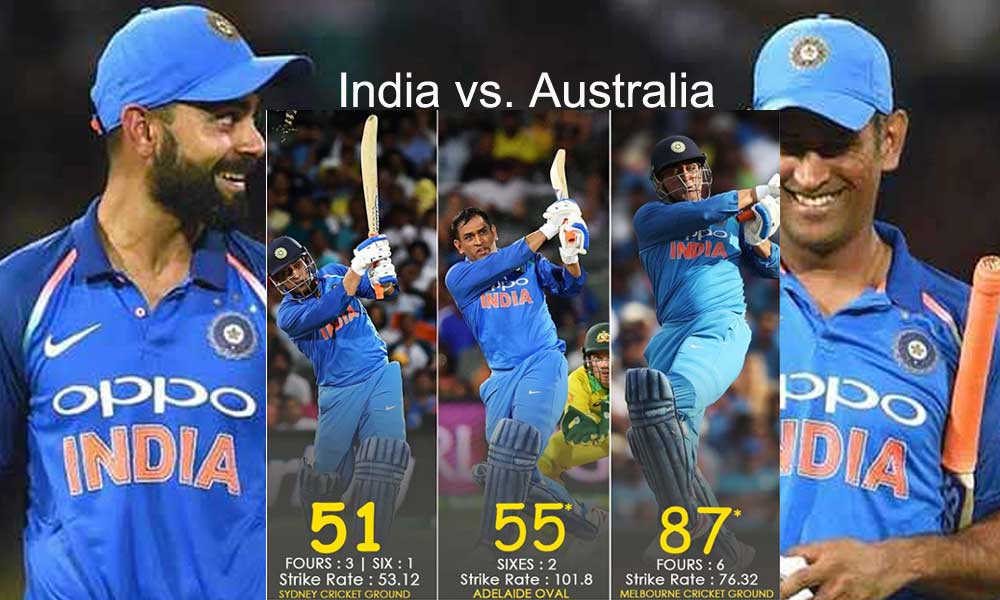 India vs Australia: Melbourne, In the words of the aggressive captain, who is known for his clear cut words”No one is more committed to Indian cricket, than MS Dhoni and batting at number five is the ideal spot for him.” Virat Kohli came forward to support the former Captain cool.

Dhoni was criticized for his slow batting in the ODI series opener in Sydney before he made the contribution in winning the match in Adelaide and Melbourne ODIs. Virat is proud of his team and has attributed his success to the team and former captain.

He was all praises for the former Captain and stood beside him in the tough times. In the words of Virat”I think firstly as a team we are very happy for Dhoni that he is amongst the runs because it is very important to get runs under your belt to get that rhythm and confidence back.

Especially when you have not been playing so much international cricket,” said the India captain at the post-match press conference.

“Many things happen outside. People say a lot of things but as an individual, we know that there is no one more committed to Indian cricket than Dhoni and people should let him have his space because he has contributed so much for the nation.

“They should let him figure out things on his own and what he needs to do. He is one of the most intelligent cricketers and he is not someone who is not aware of what needs to be done. As a team, we are totally in sync with what he is doing and we are all very happy for him.

Dhoni’s contribution in winning the ODI cannot be denied and his unbeaten 87- run on Friday and at Adelaide, his half-century was all that was enough to shut the critics. Dhoni is best suited to bat at five as per the strategy of the team and he himself feels comfortable to bat at any position.

A great win and a fabulous innings by @imVkohli. Yet another at his adopted home ground?. Excellent role played by @msdhoni and @DineshKarthik to take India over the line. #INDvAUS pic.twitter.com/7n3M2l3hZS

Nobody can beat this #10YearChallenge ?#Dhoni #MSDhoni pic.twitter.com/9K6Uzo49TJ

Another day, another final of sorts and @msdhoni hunts down another chase like he was born for that purpose. Unbelievable composure and resolve #INDvAUS #MSDhoni

MS Dhoni answers his naysayers in style by scoring his 3rd consecutive half century this year!???#AUSvIND #MSDhoni #TeamIndia pic.twitter.com/XL2bFAHWdg