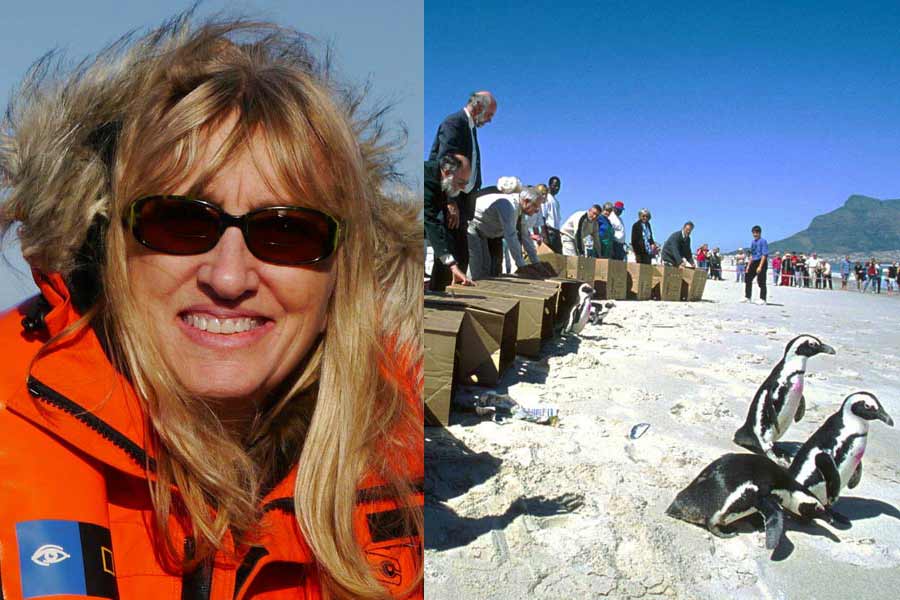 Every year on April 25, World Penguin Day is celebrated all over the globe. This day presents a good opportunity to provide awareness about the penguin species and the challenges that they face for their survival including retreating polar ice and depleting stocks of krill.

In honour of this great occasion, Dyan deNapoli who is popularly known as “The Penguin Lady” tells us about her hard work that she did in saving the lives of nearly 20,000 penguins during a rescue operation that took 20 years ago.

All the penguins were transported safely after a massive oil spill from the bulk carrier Treasure north of Cape Town, South Africa during 2 July 2000. Not only this, but she has also explained about her experience of saving so many birds during this rescue operation and what all did she faced during this phase.

Now, let me tell you about her ‘Penguin Rescue’ experience:

Sinking off a cargo ship creates an oil spill

It was during summers of 2000 when she has got an urgent call from South Africa from the manager of SANCCOB, a seabird rescue centre in South Africa, Cape Town. The manager told that the Penguins were in trouble due to the oil spill happened in the region due to the sinking off a cargo ship in the ocean off the coast in Cape Town.

Nearly 1300 tons of fuel oil flown into Robben Island which is the primary habit of penguins. The oil has covered 20,000 penguins.

It was after that SANCCOB has announced the launch to carry out a rescue operation to save the life of all the penguins that were badly oiled by the thick and toxic oil. Even, there were 1000s of volunteers who were up for help but they couldn’t d anything as they had no experience.

After 2 days, she boarded the plane to South Africa to take part in this biggest ever Penguin Rescue operation.

A deadly silence of penguin

A large warehouse had been converted into a rescue centre for the oiled penguins outside the Cape Town. The rescuers had also set up so many makeup shift pools which had the ability to hold 100 oiled birds at once.

She told when she stepped into the building, she couldn’t believe what she saw there. Nothing except the voices of people she could hear. The penguins were like dead silent. At that moment, she felt so much overwhelmed.

Her heart ached for those distressed birds and cleaning them looked like an almost neatly impossible task at that moment. But, all the volunteers including her were treating them like doctors in an emergency room.

How did she manage to clean oiled penguins?

Cleaning them wasn’t easy. The birds were sprayed with a degreaser and scrubbed with warm, soapy water. Then they were rinsed under a hose. Almost it took around an hour to go through the whole process. Do you know it took a month to bathe all the 20,000 birds at the centre in spite of having 12,500 volunteers?

The oil spill began to spread which led to another crisis

Saving thousands of oiled penguins is hard to do when you’re so #distractinglysexy in your enormous green oilskins… pic.twitter.com/3GtbMsgSxO

Oil from the spill had started to spread north towards Dassen Island. It had become almost impossible to save a number of birds as they already have 20,000 penguins in their hand. This is because they do not have enough resource to save them.

To move out of the situation, one researcher suggested moving all the penguins from Dassen Island to Port Elizabeth. And you know what the plan worked and all the penguins swam home safely which also removed their oil and they were saved luckily.

The entire penguin rescue operation took almost 3 months. It was hard for them to believe that they have managed to save such a huge number of birds from such a horrible incident. What was most inspiring for me was the hard work of volunteers.

She said, “As the Penguin Lady, I’m used to facing such hazards to care for the animals I love. What I didn’t realize was how many other people care for penguins too”.