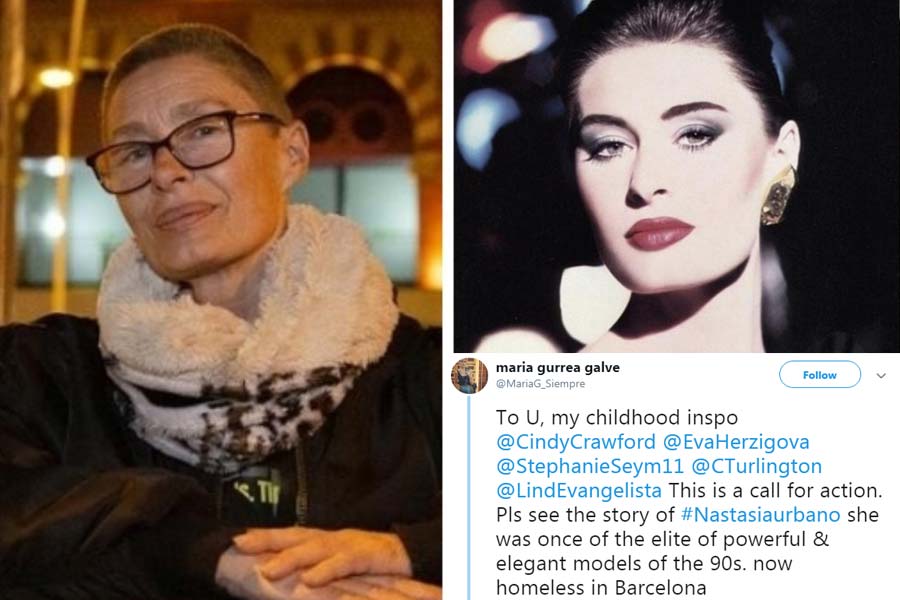 A former Vogue cover model, Nastasia Urbano, who earned a million dollars a year at the peak of her career is now homeless. Riches to rags story of the 57-year-old former model will overwhelm you.

She fronted fashion campaigns alongside supermodels like Linda Evangelista, was the face of Yves Saint Lauren’s iconic perfume Opium Perfume and dines with Jack Nicholson and Andy Warhol in the 1980s is now reduced to sleep on the bank foyers in the capital of northeastern Spain’s Catalonia region.

At the 20 the Spanish beauty was on the cover of magazines like Vogue in Europe and moved to New York where she was signed by the famous Ford Models agency.

She said ‘I did all the magazines, I was loved by everybody. I was given a million dollars a year for only 20 days of work, for three or four years.

‘I was having dinner one day with Jack Nicholson, the following day with Andy Warhol or even Roman Polanski. I was in parties with Melanie Griffith, Don Johnson, and Simon and Garfunkel.

She tasted success big time and lived a life that was just a dream for many. However, her life changed when she met a man whom she married and gave birth to kids.

To U, my childhood inspo @CindyCrawford @EvaHerzigova @StephanieSeym11 @CTurlington @LindEvangelista This is a call for action. Pls see the story of #Nastasiaurbano she was once of the elite of powerful & elegant models of the 90s. now homeless in Barcelona #womensupportingwomen pic.twitter.com/ZU4OtSQQ6H

She suffered from depression and was evicted from many houses as she could not pay the rent. She now alternates between sleeping on the sofa’s of at the houses of her friends and in bank foyers where the automated doors give access to the customers to the cash machine.

Now after seeing so much in life all she desires is   ‘I want to live, not just survive. I am tired of surviving and asking for money. The people around me have gone away, everybody goes away and I am not surprised.

‘I want my children to see me well. I want to recover as a person and to be OK, so they can be proud of me.’

After hearing about her current situation a group of her former colleagues has come forward to support her and help her to again stand on her feet.

Former model Ruth Schuler commented about her that the other models were at princess level but she was at Goddess level and seeing her like this is definitely a shock.