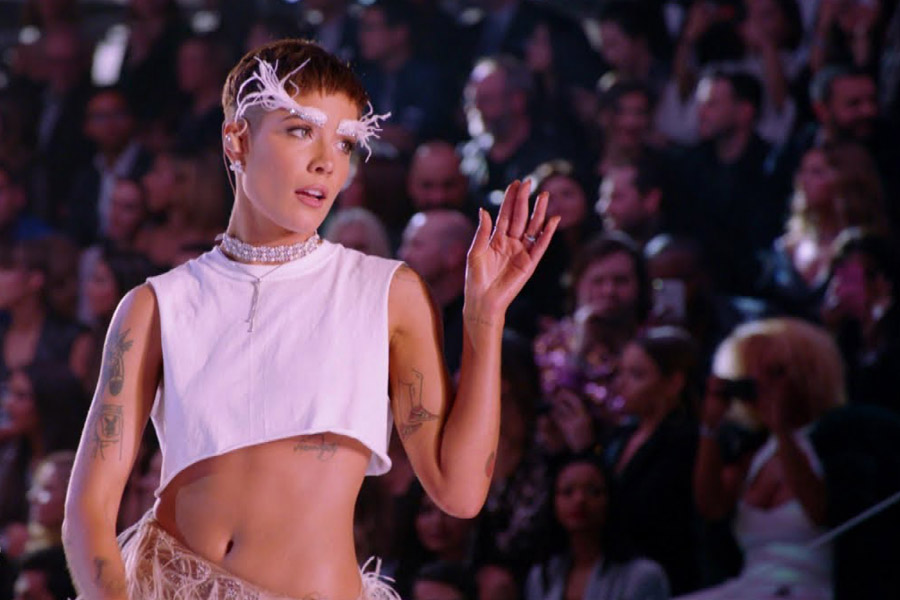 Halsey is a great American singer and her personal name is Ashley Nicolette Frangipane. She is also an eminent songwriter. She gained lots of attention through releasing music on her own in her social media platforms. In the year 2014, she got the opportunity to associate with Astralwerks and released her debut albums like Room 93. After that, she released many excellent albums that reached great heights. One of her albums “Hopeless Fountain Kingdom” got the number one place in the Billboard 200.

The singer is well known for her distinguished voice and she received many awards in her life for her singing and songwriting talents. She received Billboard Music Awards and also Guinness World Records for her songs. The singer is also spreading awareness on sexual assault victims’ support and suicide prevention. To know about the life, career, and net worth of the singer you can have a look at the information here.

Ashley Nicolette Frangipane was born in Edison, New Jersey on September 29, 1994. Her mom became pregnant with her when she dropped out of college. Then her mother worked as a security guard in the hospital and her father was part of car dealerships. Her mother belongs to Irish, Hungarian, and Italian descents and her father is an African-American. She has two siblings and from a young age used to play Violin, Cello, and Viola. Halsey came from a family who moved often from one place to another and her parents did many jobs.

She studied in six schools and during the years she was a victim of bullying. At age 17 she attempted to end her life and taken to the hospital because of that. Then after this incident, she was also diagnosed with bipolar disorder. She then became addicted to drugs and behaved as an unconventional child because of her disorder. She became a singer because of her romantic involvement with a manage 24 years. In that stage, she felt that she was top of the world and wrote songs that came naturally to her.

Then in the year 2012, she graduated from Warren Hills Regional High School in New Jersey. The singer faced financial problems and was not allowed in her home because of her lifestyle. She lived in a poorer part of Manhattan in a basement with fellow stoners without work. Eventually, she was afraid to even sleep in that part of the town because of getting violated at her sleep.

As she was already interested to sing and write songs at a very young age she began posting it on social media. She became popular because of the parody she made of Taylor Swift’s song “I Knew You Were Trouble”. In 2014 she attended a party and met a music guy with whom she collaborated. Then this is the point where her career jump-started.

As part of her music tours, she partnered with The Kooks and sang many original songs. Some of the songs such as Badlands which is about a future society impressed the audience. She was the vocalist for the popular single of “The Chainsmokers” “Closer”.  This song achieved great success critically as well as commercially. In 2017 she released “Not Afraid Anymore which also is a part of the movie soundtrack of Fifty Shades Darker.

Then the “Now or Never” released which got 52nd place in the US Billboard Hot 100. Her status as a popular singer helped her to become part of famous TV shows such as Saturday Night Live.

Halsey is bisexual. She dated her Norwegian producer Lido who assisted in producing her album Badlands. Then in 2017, she dated American rapper G-Eazy. They began to like each other when discussing an album but their relationship came to an end after one year.

Halsey is now 25 years of age. She maintains her body well. Her weight is 54 kg and her height is five feet and four inches. The colour of her hair is blonde and her eye colour is hazel.

Halsey is a fierce activist of suicide prevention and mental health. Her own experience of suicide attempt at age 17 helped her to understand the feelings of other victims. Halsey participated in the awareness campaign of suicide prevention called “I’m Listening”. She is also a feminist. In the 2017 Women’s March, she tweeted of her promise of donating one dollar for each retweet and she donated $100,000 to Planned Parenthood. She sang a song instead of giving a speech at the 2018 Women’s March.

In the song titled “A Story Like Mine”, she shared the stories of many sexual assault victims. She asked all the victims no matter the background to lend their support to each other. In the 2019 interview, she spread awareness for allowing more presence of women in the music industry. Then she was part of climate change awareness and for that, she performed the single “Earth” for charity.

The Net Worth of Halsey

The estimated net worth of singer Halsey is $15 million. Although her earnings are not known she is a very wealthy singer. Throughout these years she has sung lots of songs and taken part in many concerts and world tours. She has only encountered fewer setbacks in her singing career. At a young age, she has earned lots of money which is a great achievement indeed.

In the Little Mermaid animated movie Ariel sings ‘Part of Your World’ with shining eyes and gorgeous red locks. Halsey also sang this song by adding her own spin to it. It was for a charity event to raise money for Feeding America. The performance of Halsey on this occasion was heart-warming as she did justice to the original classic.

The singer also wore a white gown like Ariel to compliment the occasion. Many of the fans praised her for her performance phrasing “Killed it” in social media platforms. Halsey’s voice seemed suitable for this song and it was flawless.

She is one of the well-known singers of the 21st century. She is an inspiration for many singers today.