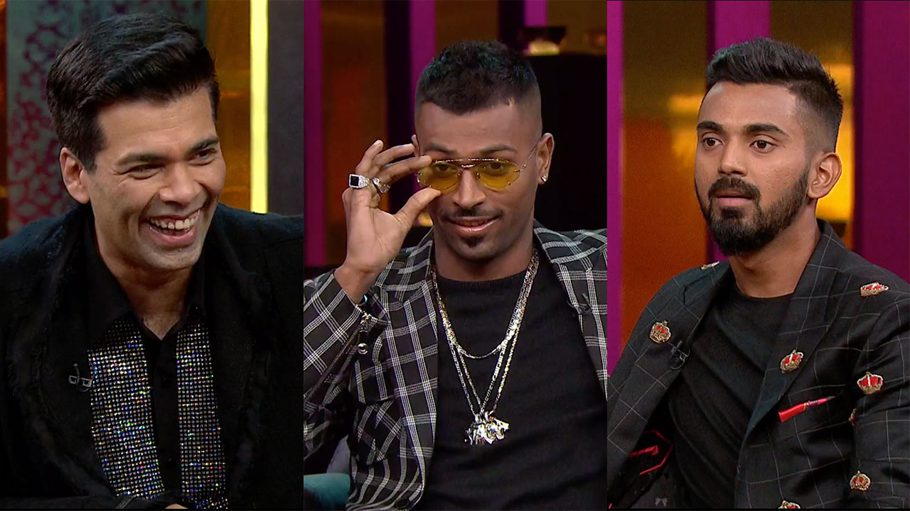 Koffee With Karan is a show that always stirs lots of controversies. This recent episode of the Season 6 featuring the men from blue squad Hardik Pandya and KL Rahul broke all records with its problematic comments and was then finally taken down by Hotstar.

Hardik Pandya apart from his playing skills is famous for his suave personality, his sexist and racist comments. For his exercising of Freedom of Speech without any responsibility, he may suffer a two-match ban by BCCI. Although he has issued an apology for the comments he made on the show.

Twitter also backlashed the player and this added to his woes. Even the aggressive captain Virat Kohli went against comments and specified that neither the team not he align with such sexist comments.

Why blame Hardik alone, I thought Karan Johar as host was equally culpable for relishing the locker room jokes and goading his guests even as their misogyny was on full display.#KoffeeWithKaran

The first ever episode of #KoffeeWithKaran where I couldn’t sit through the one-hour show … #HardikPandya proved he is a 9th standard failure … no education, no etiquette & no respect towards women … what a waste of time!!!

It might have been fun initially to watch two young sportsmen letting their guards down, but the obnoxious and misogynist attitude of Hardik Pandya just was too much to take in. At one time, cricket was called a gentleman’s sport. Where has all the class gone? #KoffeeWithKaran

“I like to watch & observe how women move. I’m little from the Black side so I need to see how they move,” #HardikPandya

Dude, first of all that’s racist cuz you just threw a shade at my Black brothers & sisters.

Second of all, you are a maha tharki#KoffeeWithKaran

Hardik Pandya In #KoffeeWithKaran says i can’t even read my name in hindi, after 9th standard i thought “ab cricket me kuch karlo nahi toh peon banna hoga”, i don’t take pressure of selection in the team.
such a chutiya generation we’re having in current indian team ?

Saw Super cheap Hardik Pandya on Koffee with Karan. Thanked my parents for sending me to school. Obnoxious, dumb and a total wannabe!! Dont defame Indian Cricketers and Our Jersey you Hiphop victim!
#KoffeeWithKaran #KoffeeWithCricketers #HardikPandya

Thanks @karanjohar for Ruining the confidence of 2 young emerging talents of India. I am glad you didnot ask who looks hotter in bikini, Anushka or Sakshi. That would have given you more TRPs. Kudos. Bravo#HardikPandya #KLRahul #KaranJohar #KoffeeWithCricketers #KoffeeWithKaran

Team India might win a lot more nowadays than earlier. But the team certainly won’t ever have the class, grace and the gentlemanly attitude which players like Tendulkar, Ganguly, Dravid, Laxman, Kumble etc used to carry themselves with, both on and off the field #KoffeeWithKaran