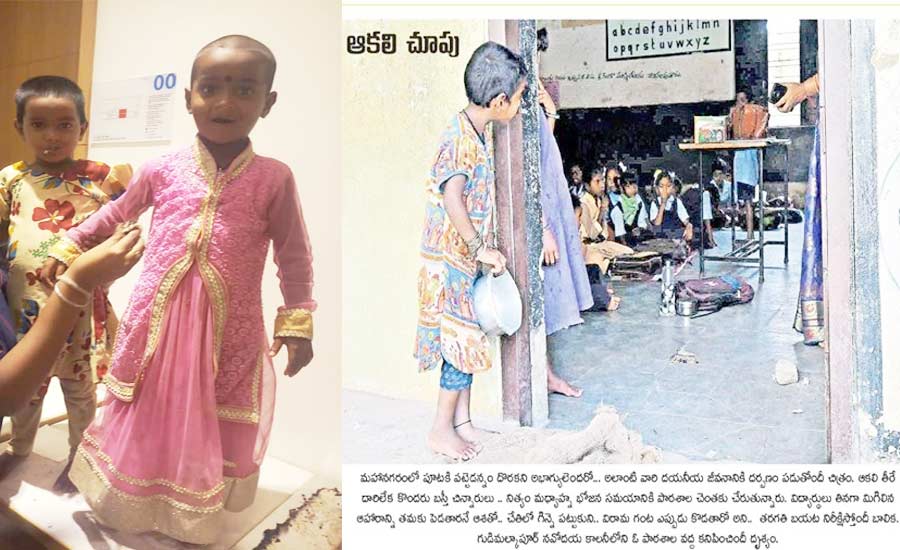 Really, social media is wonderful, and it can help you a lot. Recently with the use of the power of social media, Pune maid got overloaded with job offers from around the country. Now, this is the second time where social media is helping those who are in need. Today I will share with you a story of a poor slum girl, Mothi Divya, a daughter of a garbage collector who was seen begging almost daily outside the school with her empty bowl. And you won’t believe the heart-wrenching photo of a hungry girl got viral on the internet and was published in a Telugu daily recently. And guess what, that Hyderabad has got admitted into that same school where she used to beg. Isn’t that wonderful?

The photograph was clicked by Avula Srinivas and the picture got published in the Telugu newspaper, Eenadu with the title ‘Aakali Choopu’, which means ‘hungry look’.

She got admitted to Deval Jham Singh Government High School

The school in which she got admission is known by the name of Deval Jham Singh Government High School in Gudimalkapur, Hyderabad where her picture was clicked outside the classroom when she was trying to peep inside the class with the intense hungry look.

The heart-wrenching photograph of that girl went viral on social media like anything. The viral photograph was noticed by Venkat Reddy, who is the National Convenor at MV Foundation which is an NGO working for the rights of the girl child. He shared Mothi’s picture on Facebook and wrote, “Why is this child not enrolled and have her right to food and right to education…it’s a shame…”

Venkat Reddy enrolled her in the school

Not only did he shared the picture on social media, but also, he got in touch with his organization and the volunteers to make sure that Mothi should get the right education and good food. After some time, the girl child was enrolled in that school. All thanks to him!

Social media really did wonders for her

Taking it to social media, Venkat Reddy has shared Divya’s picture with her parents when she was going to attend the school on the first day. She was nicely dressed in a school uniform which will make your heart teary-eyed.

Netizens are happy that she got admitted in the school

The netizens are really very happy to see her like this. Here is a glimpse of how they reacted after seeing her like this-

Daughter of a garbage collector and sweeper, Divya lived in a slum near the school. She visited the school every day in the hope to get food after her parents left for work.