India vs Australia 1st Test Match: India Win Down Under in 10 Years and Beat Australia by 31 Runs 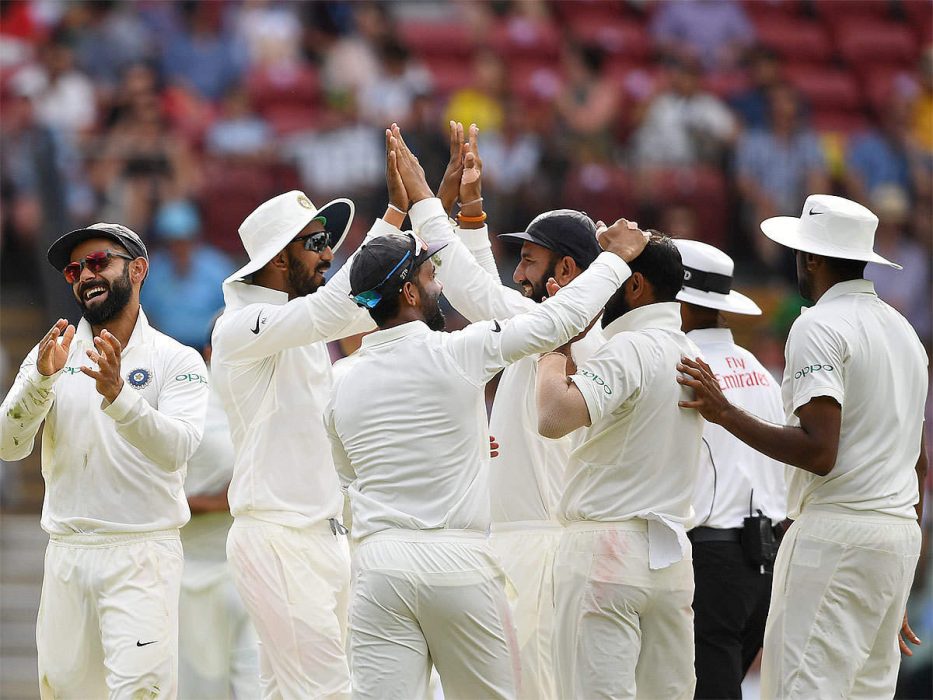 Well, it was a long wait almost of 10- year- wait for a Test win Down Under as Virat Kohli’s visiting team outplayed Australia by 31 runs in the first of the first of the ongoing four-match series in Adelaide.

The Asian giants had last won in Australia under Anil Kumble at Perth during their trip Down Under in 2007-08. They were blanked 4-0 under MS Dhoni in 2011-12 and then they had seen a defeat of 2-0 during 2014-15 tour in spite of Kohli having scored enormous runs.

The defeat could be attributed to the fact that we failed to get hold of the game-changing moments in the opening Tests during the two previous overseas tours of the year in South Africa and England, but the team of Kohli made sure that the third time will indeed be lucky for them. Having to defend a 323-run target was done successfully in spite of the stupendous efforts from Nathan Lyon, who did make the task quite difficult towards the end.

The win helped India to get a lead of 1-0 in Test series for the first time in Australia for almost after the long span of 70 years.

Congratulations team! What a fantastic start to the series. Our bowlers did great and superb innings by @cheteshwar1 and @ajinkyarahane88 @bcci Way to go! #INDvAUS pic.twitter.com/9XxqLn2Z6t

Astonishingly Kohli is the first Asian captain to win Tests in Australia, South Africa, and England. He won the Johannesburg Test against the Proteas in January this year and after this, he defeated England in the fourth Test of a five-match series at Southampton later in the August- September.

>India defeated Australia by 31 runs to win the 1st Test in Adelaide.

>India had last won a Test in Australia in 2008 in Perth under Anil Kumble.

>Kohli has become the first Asian captain to win Tests in England, Australia and South Africa.

India also becomes the first team to win a Test match in England, Australia, and South Africa in the same calendar year.

Australia resumed the final day of the riveting Test match at 104 for four, faced a tough task as no team could ever successfully chase more than 315 at the Adelaide Oval. The bowlers from India made the task all more difficult for the host team as they were full of determination and patience and striking at regular intervals.

What a way to start the series!#TeamIndia never released the pressure. Superb batting by @cheteshwar1 with crucial knocks in both innings, @ajinkyarahane88 in the 2nd innings and excellent contributions by our 4 bowlers. This has brought back memories of 2003. #INDvAUS pic.twitter.com/4gmviaKeCC

Shaun Marsh gave India looked solid in the morning session as he struck half-century but Jasprit Bumrah removed him and they reached Lunch break with relief and optimism. Earlier the day Ishant Sharma had the iconic star catch of the local favorite Travis Head for 14.

The historic victory was paved by Cheteshwar Pujara, whose first innings 123 provided India with a score that was strong enough to compensate for the bad batting performance by the top order.

It’s been a great first match at the Adelaide Oval! Thank you so much for your wishes. Really delighted with the way we played as team and put up a great fight! On to the next one now! #AUSvIND pic.twitter.com/xIEe8shsBO

The bowlers did a commendable job by striking at regular intervals to provide India a slender 15-run lead.

R Ashwin spun the web around the Australian batsmen, and Jasprit Bumrah rattled hosts with his pace. Mohammed Shami and Ishant Sharma took the key wickets to help India stay in the game.

Wasn’t aware of the record: @RishabPant777

He took 11 catches in Adelaide, the most by an Indian wicket-keeper in a Test. The young wicket-keeper reflects on the feat and speaks about @msdhoni’s influence.

The second innings saw a much better performance in India’s batting. KL Rahul scored a quick 44, Kohli patiently got 34 while Ajinkya Rahane scored 70 and shared a key 87-run stand with Pujara, who made 71 to go with his 123.

The lower order was not much in form but still managed to set Australia a 323 run-target. The fourth day was dynamic as Mohammed Shami and Ashwin got two wickets that made situation quite tough for Australia.

Aron Finch, Marcus Harris, Usman Khawaja, and Peter Handscomb were dismissed before stumps on the day before the last day.

Australia could have hoped for a bit of fight from their overnight batsmen Marsh and Head but this did not happen. Captain Tim Paine was determined to change the game but when he got dismissed for 41 the game was over for Australia.

Lyon, performed well with the ball, and collected an unbeaten 38 off 47 balls and did this gave shivers to the Indian team. He managed to score 32-run stand with No. 11, Josh Hazelwood before Ashwin got the catch and got us the much awaited historic win.