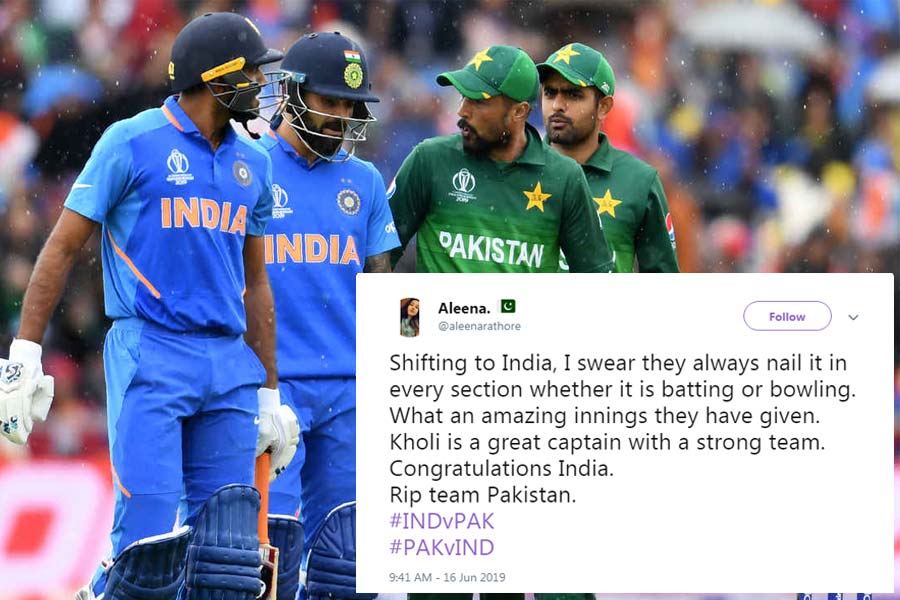 We all witnessed ” India-Pakistan” match, last night. We saw how team Pakistan lost it to Indian Cricket tram by 89 runs. It is natural for people to react both over India’s victory and the defeat of Pakistan. Sure people are taking over social media about the last night’s scenario. But, believe us it’s not the victory or defeat that people are tweeting endlessly about, the verdict of the match is not the hot point anymore on social media.

Tweetarians have taken over Twitter for all the other reasons. Somehow, they cannot take it easy on the Pakistani team and their reactions are hilarious. Don’t believe us?

Well, take a look at these tweets and try to stop laughing.

Watch till end! The reaction of some Indian fans is just hilarious ? #indiavspak pic.twitter.com/5JkE48UhnM

Apart from everything, we must learn to appreciate the beauty of the game.

We can take sides and support our teams but both sides have the ability to stun us.

Pak being the unpredictable and India with the strongest batting order, let there be some good cricket.

My Personal fav blogger Momin Saqib so true about the team. #ICCWC2019 pic.twitter.com/Y7qJRCm8Vv

You can also read: Top 5 Players Who Can Get The Most Wickets At The World Cup

Shifting to India, I swear they always nail it in every section whether it is batting or bowling. What an amazing innings they have given. Kholi is a great captain with a strong team. Congratulations India.
Rip team Pakistan.#INDvPAK#PAKvIND

You can also read : 7 Lesser Known Facts About Rohit Sharma “The Hit Man”

Don’t call me a traitor, but look at the Indian players, they look like proper athletes, our players look like they’ve eaten two plates of waris nihari with feeqay ki lassi and benazir kulfa, all at once.

They broke their TV ? after defeat against India. Our so called heroes playing with fans emotions.#PAKvIND #INDvsPAK #INDvPAK #CWC19#سرفراز_کو_گھر_بھیجو pic.twitter.com/clNLZJadYu

*how many times paki team have played with our feelings* #PAKvIND pic.twitter.com/7luxltH04o