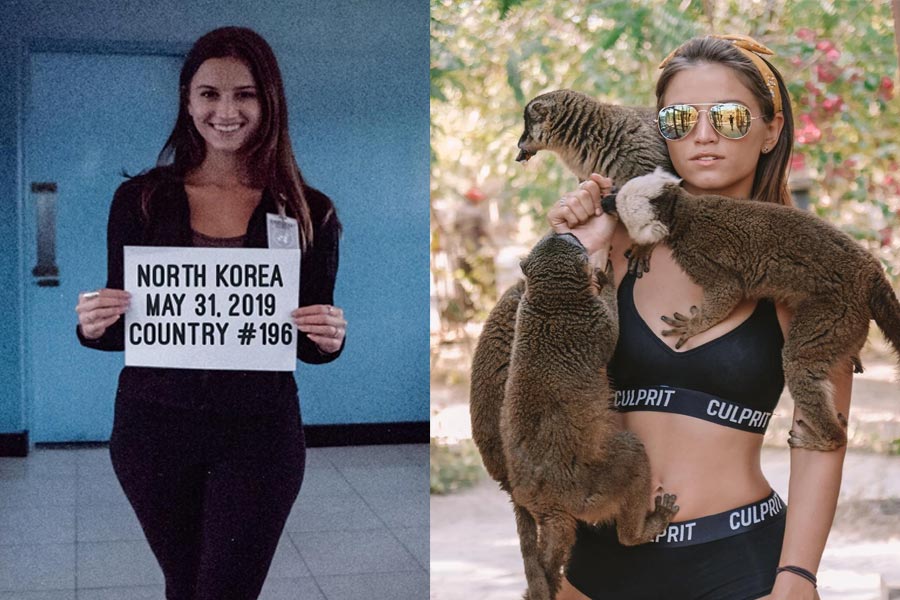 While we must be thinking about our next summer vacation plans, this American girl, Lexie Alford who is merely 21- years-old has officially travelled to every country recently as claimed by her. To let you know she hasn’t taken any help from her parents for her trips. All the trips were self-funded by her only. Well, it seems that she is kind of a person who is so passionate about travelling.

Lexie Alford says her impressive achievement of travelling around the world was completed on May 31, when she just stepped her foot in North Korea.

With her love for travelling, she also managed to beat other travellers as well including James Asquith from the UK, who holds the Guinness World Record of travelling to all sovereign countries who was also very young (24 years) to travel to number of places on 8 July 2013, in accordance to the Guinness website.

Lexie took her achievement on her official Instagram Account, where she posted a picture along with a caption, “OFFICIALLY TRAVELED TO EVERY COUNTRY IN THE WORLD it’s crazy to have years of hard work culminated into one single moment. I’m so grateful to everyone that’s helped me get here. The greatest chapter of my life is coming to a close. Cheers to a new beginning.”

OFFICIALLY TRAVELED TO EVERY COUNTRY IN THE WORLD?? ⠀⠀⠀⠀⠀⠀⠀⠀⠀ it’s crazy to have years of hard work culminate into one single moment. I’m so grateful to everyone that’s helped me get here. The greatest chapter of my life is coming to a close. Cheers to a new beginning ?⠀⠀⠀⠀⠀⠀⠀⠀⠀ ⠀⠀⠀⠀⠀⠀⠀⠀⠀ Photos by @thomasbrag

According to a report published in Forbes, Alford’s family owns a travel agency in California. She has been working to travel to these 196 sovereign countries ever since she was a child.

Alford was initially not trying to break any records, but in 2016 she got serious and it was then only when she has decided to break other traveller’s record of travelling the world and entering into Guinness World Record.

You’ve been here before. It’s the morning after returning home from a life-changing trip. You saw so many amazing places, became immersed in a completely different culture and learned so much about yourself and the world around you. You need to tell someone or anyone that will listen, as if that would help organize all the exciting thoughts running through your mind. You sit down at your laptop, open a blank document and… nothing. You have so much to say but every time you place your fingertips on the keyboard, the right words just won’t come out. ⠀⠀⠀⠀⠀⠀⠀⠀⠀ This is how I’ve been feeling all the time. I started writing a book a few months ago and I have no idea what I’m doing. I’ve gotten into the habit of only writing when I feel inspired which isn’t the most productive creative process. I’m really excited about this project and becoming a better writer but I have soo much to learn. What do you guys do to get into a creative mindset and stay there? Any advice would be much appreciated ?

At the age of 18, Lexie has travelled to 72 countries and that was the first time when she thought of breaking the world record which she has already achieved.

After travelling to so many countries now Lexie is planning for something really great. She is planning to write s book which will explain all her travel experiences. Not only this, but she is also planning to gear herself up for public speaking which is on 15th June.