Make Some Room For The Incredible Adventure That is Beary 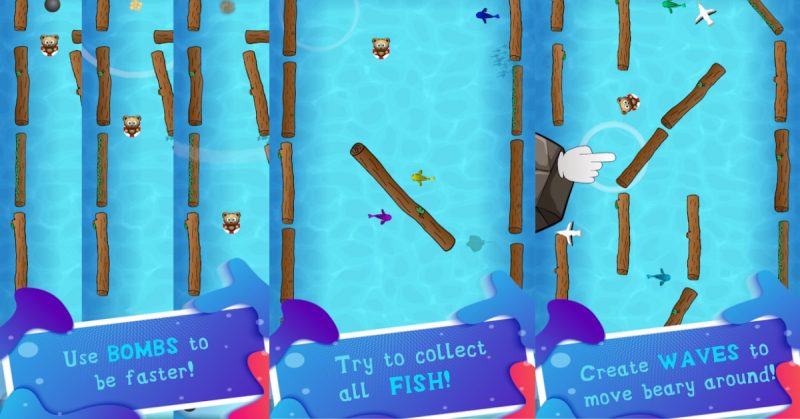 Rescue Beary is an adventure puzzle-style game that reinvents exhausted gameplays of the genre instead opting for an endearing water physics interface. The story’s plot revolves around a stranded bear called early’ whose plane crashes into the deep ocean leaving him lost in turquoise waters.

Players are responsible for safely guiding the protagonist across various levels and eventually safe to shore whilst dodging threats such as sharks, whirlwinds, and obstructive logs.  Features Available for download on both Apple and GooglePlay Stores and iTunes,

i)  A mesmerizing water setting that makes for beguiling eye candy.

ii)  Bonus accessories such as ropes, bombs, etc to spruce up gameplay.

iii)  Progressively difficult levels that are fun and challenging in equal measure.

iv)  Offline playability as no internet connection is necessary to access essential features.

v)  Three fish varieties to be collected for each level.

vii)  Controls that are easy to learn and highly responsive as well.

How the game works As mentioned before, gameplay hinges on a water physics concept where you maneuver the lead character across an aqua backdrop in a course demarcated by blocked logs. Movement basically involves the use of tap-triggered ripples to generate motion in one direction or the other depending on the position of the wave.

Bombs also work in a similar fashion although they generate more thrust while ropes are also important tools that can be used to get past obstacles.   Whilst doing all that, you are also required to collect fish in the field of play to replenish Beary’s dwindling energy levels as well as get to treasures guarded by menacing sharks.

If you kick the bucket, there is a revival option that lets you retrace Beary’s steps for a portion of your coins which you earn after successfully completing levels.

Why Beary is cut from a different cloth The controls are simple but commendably challenging to figure out generally relying on a trial and error approach that makes the game unpredictable and consequently fun. Plus, the interface is quite idyllic and picturesque with the visual appeal of the game being of the highest order.

Is it worth your time? With a unanimous 5/5 rating from reviews on GooglePlay Store so far, Beary is without a doubt doing everything right. Nothing but praise after praise crops up from those who’ve experienced the game first hand which goes a long way to show that it’s certainly one worthy of a place on your home screen.