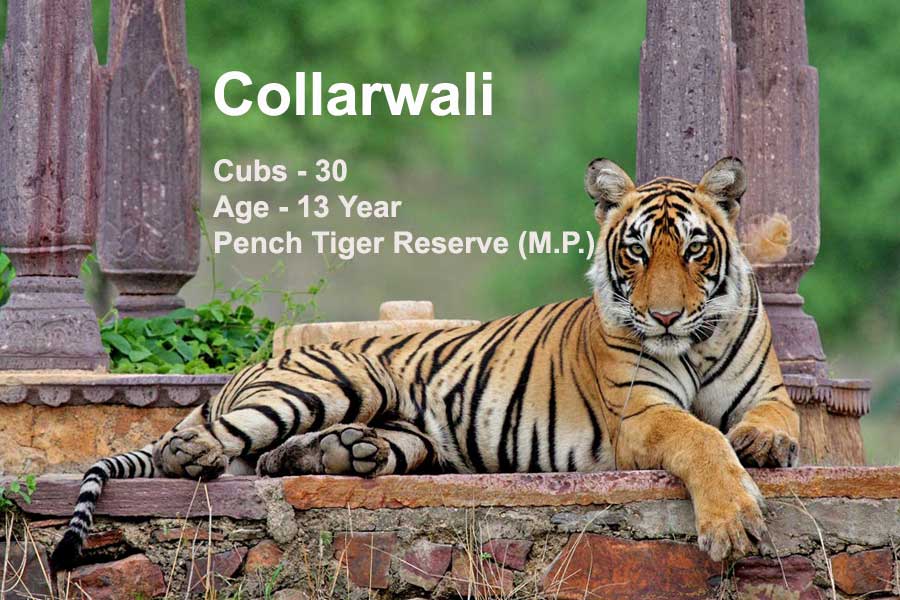 The 13-year-old tigress popularly known as Collarwali or T15 or ‘Queen of Pench’ and Pench Princess. She hails in the Madhya Pradesh’s Pench Tiger Reserve (PTR) The visitors named her as Collarwali as she has a radio collar. When she was a young cub to track her movements. The radio collars are not used anymore but then her radio continues to hang around T15s neck and thus the name.

Since 2008, she gave birth to 30 cubs and that is the highest record of all the tigresses in India. Recently she was spotted with her new cubs. The cubs are small but are in pink of their health.

No news better than this. What a incredible mother. pic.twitter.com/8UvSOvYj6E

Collarwali is the daughter of famous tigress Barimada, who was featured in the documentary of BBC called Spy.

Another boost to the future of tigers in Madhya Pradesh as the tigress -Collarwali has given birth for the 8th time, with 4 newborns welcomed at the Pench Tiger Reserve. In last 15 years, the tigress has given birth to 30 cubs, which is a record for the reserve in MP. #SaveTigers pic.twitter.com/kssUI5IUuq

The cubs she delivered in 2008 could not sustain the harsh climates and die of pneumonia in 24 days of their birth. Then again in October 208 she gave birth to 3 male cubs and kept them in warm caves at 13 different locations.

Therefore she is definitely a superwoman.