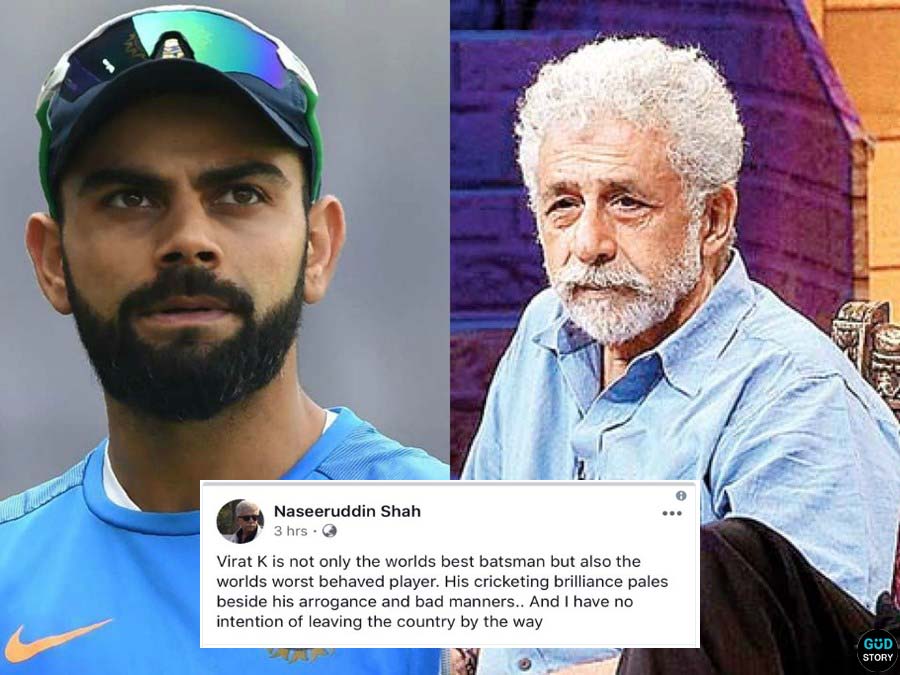 Two brilliant people from their respective fields with a huge fan following when the comment, get immense action regarding it on Twitter. the Ghalib’s actor had commented on the present Indian Cricket team’s Captain and the comment was both positive and negative. He commented that Kohli is on the best batsman but then at the same time he is the worst behaved player.

Well to his statement there was immense support but yes there were haters who strongly disagreed with him. However few added that for Kohli even the world ‘worst’ is just an understatement.

However there is no response from the side of the player, which does give him a brownie point as he kept cool, but then it could just be the calm before storm owing to the fact that Kohli is one of the most aggressive players.

Very Strongly Agree with Naseeruddin Shah Saab. Worst word is not enough for this brat. there shud be new word innovated above worst for this brat called Virat Kohli. #INDvAUS

I do agree with Naseeruddin Shah, only if the standards are the ones set by the previous generations of players. I think Virat Kohli just reflects the attitude of this generation. We need to teach our kids how to behave. Thanks to Mr. Shah for starting the conversation. #AUSvIND

Somebody please give some work to #naseeruddinshah . He wants to come in limelight by passing such stupid remarks. I respect your work but you should not spoil iur image with such acts. Focus on ur work and in your life#viratkohli
https://t.co/h4RVYIswQ8

Someone please show these pictures to Mr. Shah. pic.twitter.com/Kp94tGyCwu