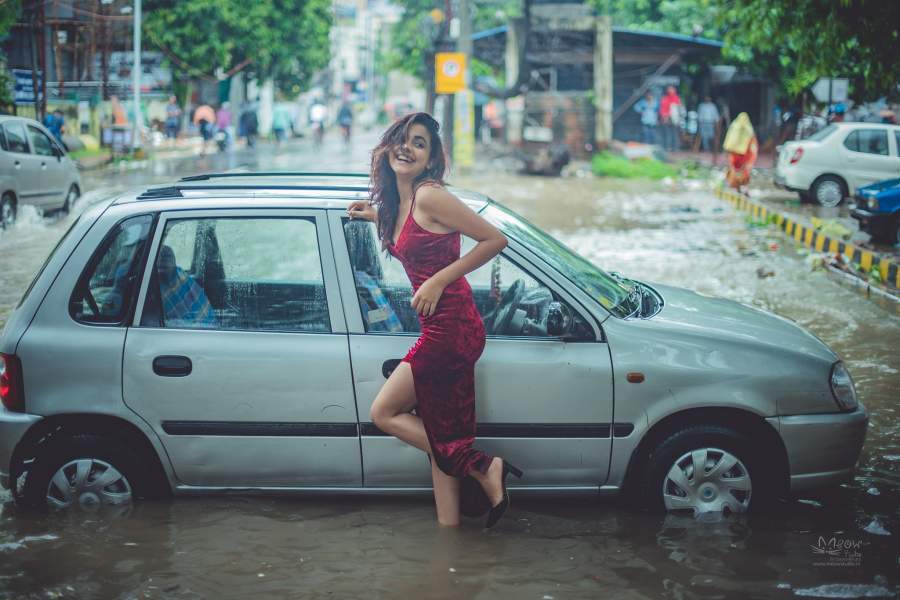 Well, it is very sad that the roads and homes of the people residing in Patna have been flooded due to the heavy rain for continuous three days. The hustle and bustle of the city have come to a standstill over the weekend after many areas of the city got submerged into the deep water. Even, three teams of the National Disaster Response Force have also been deployed in Patna to rescue people from this devastating situation. Seeing the condition getting worse, schools are also closed till Tuesday. And, between all this who would appreciate the woman’s photoshoot in mid of the flooded street of Patna roads.

No doubt, the lady and the young photographer have gathered the courage to do something like that which got spread on social media like fire in the bush. But who’s that girl?

The girl named Aditi Singh is a student of the National Institute of Fashion Technology (NIFT) who caught posing on the flooded streets of Patna. The photographer’s name is Saurabh Anuraj who did the entire photoshoot and he also shared the pictures on Instagram and Facebook which got mixed comments.

Photographer captioned the picture as ‘Mermaid in Disaster’

Saurabh Anuraj titled the picture as ‘Mermaid in Disaster’, where Aditi could be seen wearing a red velvet high thigh slit dress. Most importantly, she could also be seen smiling while getting her photoshoot done on the waterlogged streets of Patna which is really commendable. As she stood happy ignoring the real situation.

Also read: 6 Celebrities Who Took A Stand and Never Promoted The Wrong Product for A Few Multi-crore Deal

While sharing these pictures on social media, Anuraj explained that the pictures are only representing the condition of the city and nothing else.

These are his words, “Photoshoot bas Patna ke current situation ko dikhane ke liye kiya gyaa hai isko galat way me na le (This photoshoot was done to show the current situation in Patna. Don’t take it in the wrong sense),” he wrote on Facebook. He continued further by saying while seeing mixed comments on the picture shared by him, “It’s not that easy. Come see what hard work it takes to send out a message. By sitting in the balcony, shooting videos and criticizing others won’t really help,”

People are mistaking this photoshoot as something else, but the reality here is the young photographer is trying a unique way to show the devastating condition of Bihar floods.

Also read: #JCBKiKhudayi, Here is Everything You Need to Know About The Funniest Social Media Trend

The photo got mixed comments from the people

Everyone has a lot to say about this. While some have appraised the efforts of Aditi as well as the photographer whereas on the other hand, some have criticized them by saying ‘romanticizing the floods to their own advantage’.

On Instagram, one user commented, “After you’re done with the photoshoot, do find some time to help those in need. Another one commented, “You cannot romanticize or glorify a natural calamity,”

Some of them loved the concept

“Love the concept,” wrote one person. “Why is everyone agitated on seeing this photo? Don’t criticize blind sentiments,” another asked.

How to Tie A Tie: The Effortless Ways to Look Stunning in Formal Wear