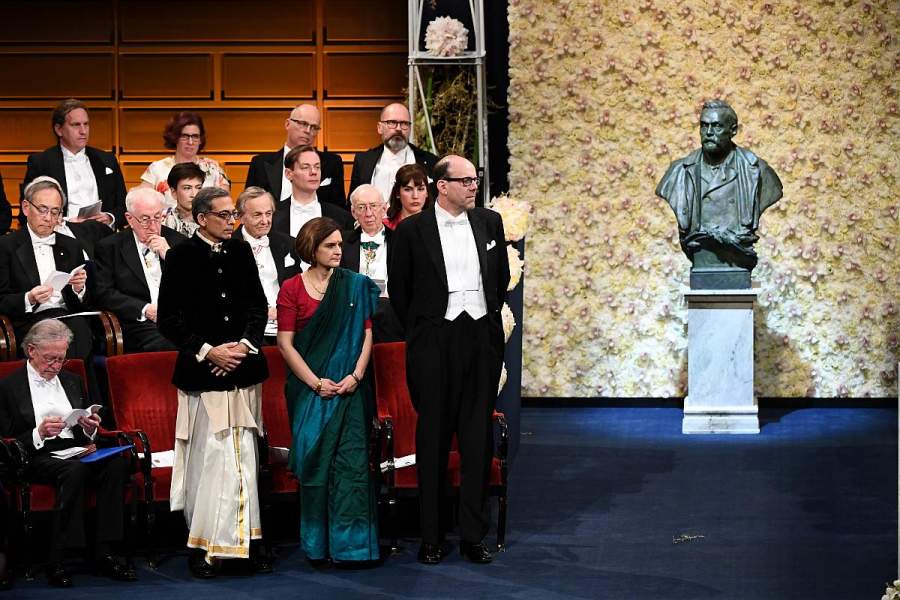 Our India and its culture are incredible and we know that. No matter where we go and what we become, we can’t forget that desi swag whether for food or in terms of clothing. And these Nobel laureates are better proving that who proudly receives the Nobel Prize by ditching their official dress code and choosing to wear dhoti and saree and this is what has won our hearts.

Nobel laureate Abhijit Banerjee and his French-American wife Esther Duflo along with their colleague Michael Kremer have received the 2019 Nobel Prize in Economic Sciences for their outstanding contribution towards alleviating global poverty.

Banerjee and his wife were looking dapper in Indian attire

The US-based economists looked dapper with Banerjee turning up in a black Bandhgala with traditional white-gold bordered dhoti as a nod to his Bengali origins, while his wife Esther wore a blue saree and red blouse along with the bindi at the event. Their colleague Kremer was dressed in a formal black suit.

Though the official dress for men was white tie and tails and women were supposed to wear evening gowns. But the duo has decided to break the code and go with the Indian attire which has won millions of hearts.

In a tweet, the Nobel Prize committee shared a small video of Banerjee, Duflo, and Kremer receiving the award. “Watch Abhijit Banerjee, Esther Duflo and Michael Kremer receive their medals and diplomas at the #NobelPrize award ceremony today. Congratulations!

They were awarded the 2019 Nobel Prize in Economic Sciences for their experimental approach to alleviating global poverty,” Nobel Prize tweeted.

They were awarded the 2019 Prize in Economic Sciences “for their experimental approach to alleviating global poverty.” pic.twitter.com/c3ltP7EXcF

More than the prize, it was their dress that caught the attention of Twitter users. A user wrote, “It’s so heartwarming to see #AbhijitBanerjee in Dhoti and #EstherDuflo in Saree…Proud moment for all Indians. Another user wrote, “A moment of pride for every Indian around the world.”

Proud moment to see an Indian #AbhijitBanerjee getting the #NobelPrize for his work on alleviating global poverty.
An invitation to join our economic think-tank in spite of his contradictory views, will show not only grace but an open minded approach. pic.twitter.com/rgJl4NCjyV

After receiving this award, Banerjee is the only second Indian to receive this Nobel Prize in economics after Amartya Sen.

Congratulations to Abhijit Banerjee on being conferred the 2019 Sveriges Riksbank Prize in Economic Sciences in Memory of Alfred Nobel. He has made notable contributions in the field of poverty alleviation.

Taking to Twitter, he tweeted: “Congratulations to Abhijit Banerjee on being conferred the 2019 Sveriges Riksbank Prize in Economic Sciences in Memory of Alfred Nobel. He has made notable contributions in the field of poverty alleviation.”

Little Brief about Banerjee and his wife

Banerjee was born in 1961, He has completed his studies at Presidency College, Kolkata, and JNU in Delhi. After that, he completed his Ph.D. from Harvard University, US where he also taught and currently he serves as a professor at Massachusetts Institute of Technology (MIT). Not only this, but he is also the author of four books including Poor Economics that has won the Goldman Sachs Business Book of the Year.

He has also directed two documentary films. While his wife, Duflo is the second-youngest woman to be awarded the prize in economics. Do you know she is also the former advisor of ex-president Barack Obama?