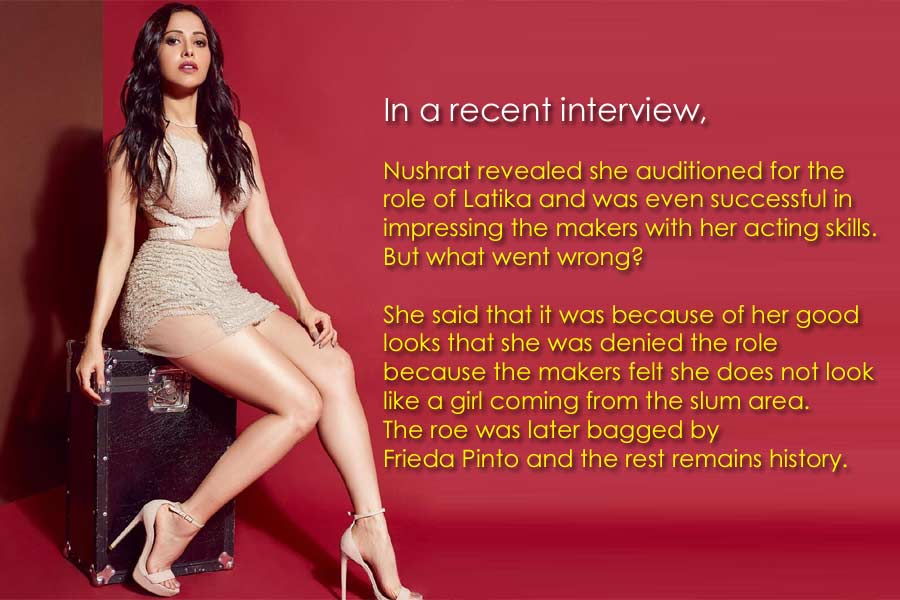 Do you remember Nushrat Bharucha, who has played the lead role in one of the great Bollywood movies, ‘Pyaar Ka Punchnama’ in the year 2011? No doubt, the actress is very bold and beautiful who did not show her great acting skills only in the Bollywood movies that we saw but she also has acted in South movies. She rose to fame when she played the lead role in Pyar ka Punchnama and after that in the movie ‘Sonu Ke Titu Ki Sweety’ along with Kartik Aryan. Very soon we will get to see her new movie, Dream Girl in which she has been paired opposite to Article 15’s actor, Ayushmann Khurrana.

Nushrat Bharucha reveals why she got rejected for ‘Slumdog Millionaire’

She further revealed that the makers of the movie were also quite impressed with her acting skills. But they can’t take her because of her good looks which do not make a good fit for the role needed in the movie. The role which for which she needed to act was of a girl who belongs to a slum and she was not the right fit because she looks very beautiful and she could not get fit for the slum girls’ character.

Later, the role was played by the very hot and bold actress, Frieda Pinto (as Latika) who has a slight dusky complexion that Nushrat which seems to be a perfect fit for the role.

If we talk about the professional life of Nushrat, she is gearing herself up for the two new movies other than ‘Dream Girl’. She will be next seen in the movie ‘Turram Khan’ opposite to Rajkummar Rao. Talking about her next movie, she will also be seen in the upcoming movie ‘Hurdang’ alongside Sunny Kaushal. We wish all the very best to her for her upcoming future endeavors.

Well, this must be very shocking for you all to know that the actress has been rejected for the role she wanted to do because of the good looks for which everyone craves. But never mind, we are hoping for the best things to come in her way and may she get the best of what she deserves in the future.