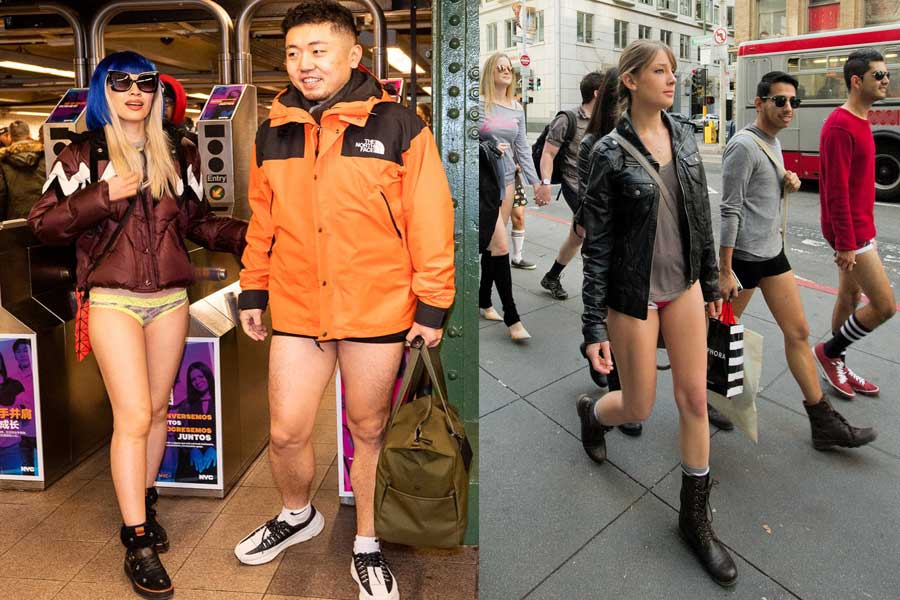 Wearing good dresses from big brands is something that attracts attention and is definitely a global phenomenon. But going without pants not to protest but to celebrate silliness is such a welcoming gesture. Hundreds stripped down their pants to support No Pants On The Tube event and No Pants Subway rides.

The event started in New York in 2002 and the motive is to make people don a smile and the ones who participate behave like they didn’t notice.

The no pant event was held at different cities like the New York, Chicago, London, Berlin, Amsterdam, and Prague.

The event was started by Improv Everywhere comedy collective.

The temperature is freezing but it does not affect the participants and in spite of being clad in their winter wear they move out and take the ride without the pant.

The participants have their winter coats, scarves gloves, and caps but the pant goes missing and people smile they ignore and behave as if they did not understand.

They keep a straight face and stare back at people who asked them if they are feeling cold.

This is real!
Dozens of Chicagoans participated in the 8th annual No Pants Subway Ride on the CTA Red Line.
This is happening in multiple locations across the world, including New York, Berlin, and the Netherlands.#NoPantsSubwayRide #Chicago #NoPantsDay pic.twitter.com/MfsaMv3Ujq