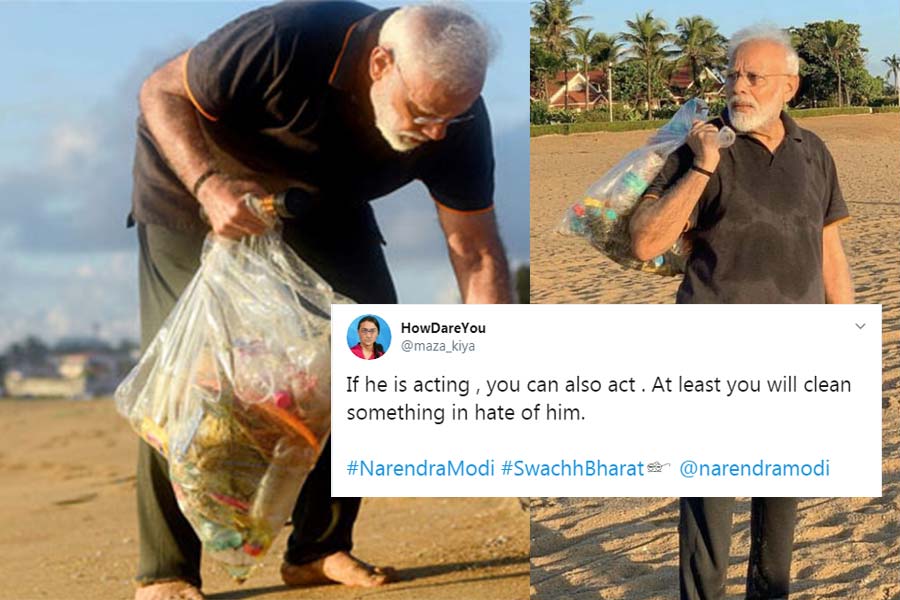 Prime Minister Narendra Modi is a name that needs no introduction. He is a man of words, what he said, he does. As we know he is so strict regarding preserving Mother Nature and preserving our environment. That’s why he encourages everyone to avoid the use of plastics in daily life and he is the man behind launching Swacch Bharat Mission in India to encourage everyone to make India neat and clean. Recently, we also him on a cleaning spree at Tamil Nadu’s beach, Mamallapuram ahead of meeting with Chinese President, Xi Jinping. Most of the individuals have appraised Modi for this act while some are making fun of him by saying, cleaning plastic with plastic and some other comments.

Even PM Modi also released the video on Twitter where he could be seen picking up plastic garbage from the beach and other kinds of waste from while doing his morning walk which got viral on social media. He was wearing a black kurta and dhoti, walking barefoot and picking up litter very nicely.

Plogging at a beach in Mamallapuram this morning. It lasted for over 30 minutes.

Also handed over my ‘collection’ to Jeyaraj, who is a part of the hotel staff.

Let us ensure our public places are clean and tidy!

Let us also ensure we remain fit and healthy. pic.twitter.com/qBHLTxtM9y

On his Twitter profile, he mentioned, “Plogging at a beach in Mamallapuram this morning. It lasted for over 30 minutes. Also handed over my ‘collection’ to Jeyaraj, who is a part of the hotel staff? Let us ensure our public places are clean and tidy! Let us also ensure we remain fit and healthy.”

Seeing his Post on Twitter, fisherman K. Vinod who belongs to the Ocean awareness group, responded, “When the Prime Minister can do it, why can’t ordinary people too.

One of the Mamallapuram residents appraises Modi’s Act

Appraising the act, Mamallapuram resident, Aine Edwards had also posted several photographs where she says how clean the town and beach looks after the summit. “It just shows that the town has the potential to be clean. The humans, who cleaned it up so beautifully, did a good job. But can they keep it that way?” she asked.

Some of them also criticized this act of Modi, Actor Prakash Raj on Twitter said,

Nice tweet @prakashraaj “where is our leaders security…. y have u left him alone 2 clean with a cameraman following….#JustAsking ?? pic.twitter.com/1svHj2EFSd

Other people said that the beach was already clean since it’s a tourist place. Modi is just trying to raise his name that’s it. For example Kancheepuram District Collector, P. Ponniah said the plastic must have washed up onto the beach. “Since the beach is visited by tourists, it is usually kept clean. We had also cleaned up the beach before and during the summit,” he said. Here, he means to criticize his exercise.

As PM Modi has arranged an informal summit with Chinese President, Xi Jinping, he also discussed with him lots of other areas of concern and issues that are affecting our environment and nature. They both met at Mamallapuram and held the second round of talks at Taj Fishermen’s Cove in Kovalam.

PM #NarendraModi took Jinping to Mamallapuram beach for a reason.
1400 years ago Pallav king of Mamallapuram was involved in import and export of goods to China via sea route.@narendramodi choose this location to inform Chinese President about this and strengthen our ties. pic.twitter.com/W0roya62T1

This year while giving a speech on the occasion of Independence Day, PM Modi had announced a campaign to make the country free by not using any kind of plastic. Now, we need to wait and watch how many of us will follow what he said to keep our country clean.

Many people are telling that he is pretending to clean the beach. For all those haters, Team GudStory wants to give a simple msg which is the same in the following tweet..

If he is acting , you can also act . At least you will clean something in hate of him.#NarendraModi #SwachhBharat @narendramodi pic.twitter.com/GBZQQvyXo2