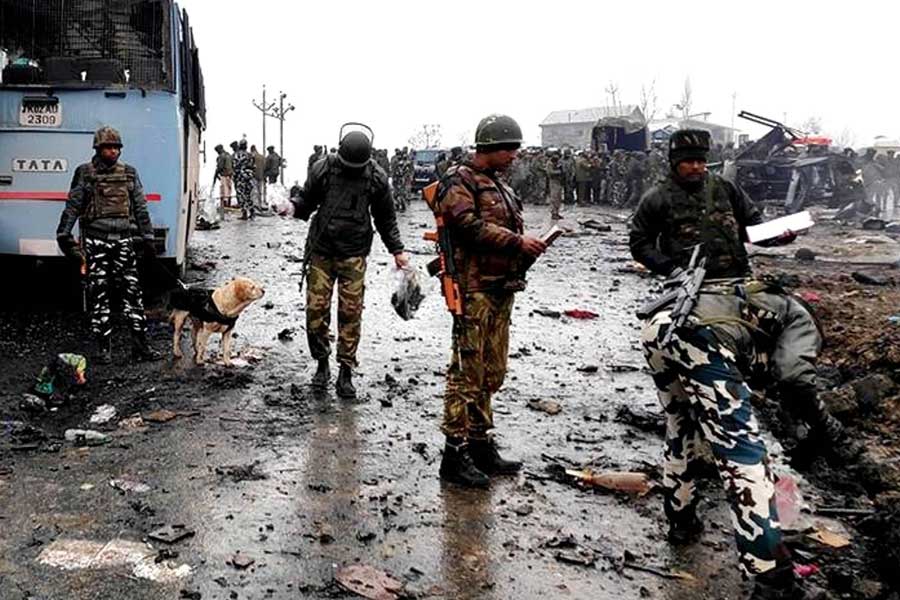 On Thursday in one of the deadliest terror attacks in Kashmir, the Pakistan based terrorist group Jaish- E- Mohammed targeted A CRPF convoy of vehicles. A suicide bomber from the terrorist group targeted the bomb resulting in the death of 44 jawans. the injured have been moved to army base hospital in Srinagar, 20 km from the site of the attack. Jaish suicide bomber has been identified Adil Ahmad Dar and rammed an SUV laden with explosives into the bus in which the CRPF  jawans were travelling.

The head of government from the various countries have sent their condolences over the martyred Jawans.

India condemns Pakistan for the terror attack. In a very strong worded statement they have urged Pakistan to “Pakistan stopped supporting terrorists and terror groups operating from their territory.”

The center also appealed to the “international community to support the proposal to list terrorists, including Jaish-e-Mohammed Chief Masood Azhar, as a designated terrorist under the 1267 Sanctions Committee of the UN Security Council.”

As per the statements from the Home Ministry it has been said that the terrorists triggered the attack while 78 vehicles with over 2500 CRPF men were on the Srinagar Jammu highway. The highway had been sanitized in the morning, and the authorities claim it to be an act of ‘serious breach’ of security.

The photographs from the site of attack are heart-wrenching the human body parts are littering around beyond recognition. The man who came as the suicide attackers Adil Ahmad Dar AKA “Waqas Commando” is the resident of Kakapora and had joined the terrorist group only last year.

PM Narendra Modi tweeted that the sacrifice of the men will not go wasted. In deep anger and strong words, he said, “The attack on CRPF personnel in Pulwama is despicable. I strongly condemn this dastardly attack.

The sacrifices of our brave security personnel shall not go in vain. The entire nation stands shoulder to shoulder with the families of the brave martyrs. May the injured recover quickly,”

Union Home Minister Rajnath Singh will visit Srinagar today to review the situation and has assured to give a strong response to the attack. In  very tasteful words he said “We completely understand our responsibilities… will take whatever action is necessary,”

The National Investigation Agency will inspect in the matter along with the Jammu and Kashmir Police. It has been declared as the worst and the filthiest terror attack in the century. The attack is even bigger than the terrorist attack at the Uri, in September 2016.

As you go to a bed tonight say a silent prayer for those 40 families who will be staying awake tonight with tears iin their eyes and unbearable pain in their hearts.#PulwamaterrorAttack. pic.twitter.com/K83yBJtnwx

This pic has very deep meaning … Salute to every army soldiers who sacrifice their lives just to save our nation … They r the real heroes of the nation … Jai Hind#IndiaWantsRevenge #PulwamaTerrorAttack pic.twitter.com/RCMHrfmgfe

“There will be no further discussion from the Congress party on this. We will stand by whatever the security forces and the government will do,” says Congress president Rahul Gandhi