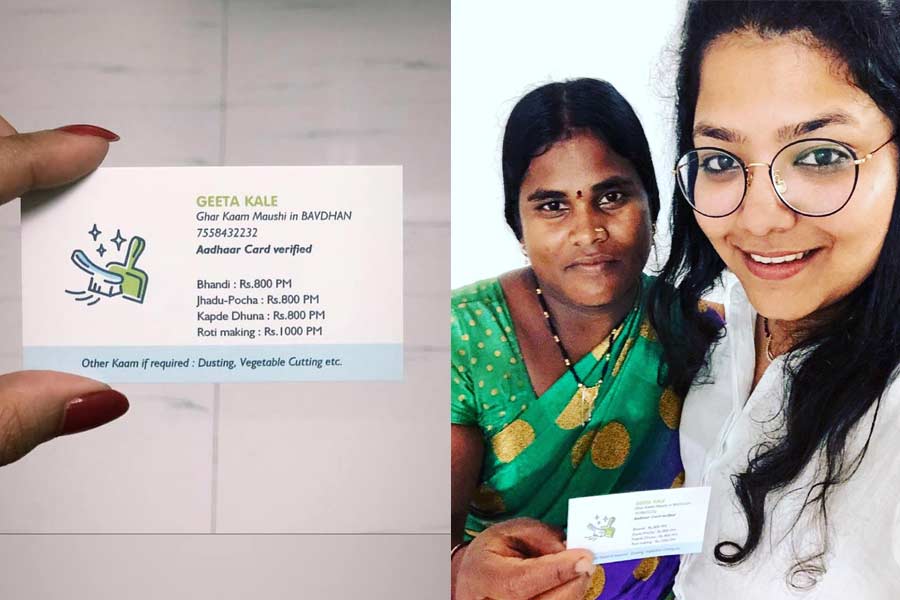 Well, anything can happen in India. You might have come across the post recently which is about a maid, Geeta Kale who works in Pune at Dhanashree Shinde‘s residence along with many other places. The picture of her visiting card which was designed by her employer has gone viral and now she is getting jobs from around the country. Have a look at the whole story behind it which will leave you surprised.

Geeta Kale is employed for household chores at Dhanashree Shinde’s residence in Pune. A Facebook user, Asmita Javedkar has shared her story which has gone viral on social media and now she is loaded with many job offers from the whole country which is simply heart-warming.

Asmita wrote in her post, Geeta lost a job recently due to a “situational issue” and Dhanashree found her “visibly upset” about it after she returned home from the office. “The bigger problem being, an income deficit, close to 4000 rupees a month,”. Have a look at her whole post here.

Knowing about the incident through which Geeta was going through, Dhanashree also got equally distresses and she decided to help her and take out of this situation. To help her, she put her excellent branding skills forward. Within 24 hours, she has designed a smart business card to help her get a job.

Not only Dhanashree, but the society watchman has also helped Geeta to distribute the cards in their neighbourhood to make her work easy.

Soon, after her business card was created, Geeta’s phone hasn’t stopped ringing since then.

Netizens have loved this unique idea

The way her employer has put his maid’s story forward, she is getting lots of appreciation from the people around the world. They loved the intention behind it.

I wish every maid gets employer like Dhanashree who stood next to Geeta and helped in every best possible way she can. She has not only helped her to get a job but has also been an excellent moral support during her bad phase. We wish all the very best to Geeta and Dhanashree for future endeavours. Stay blessed always!