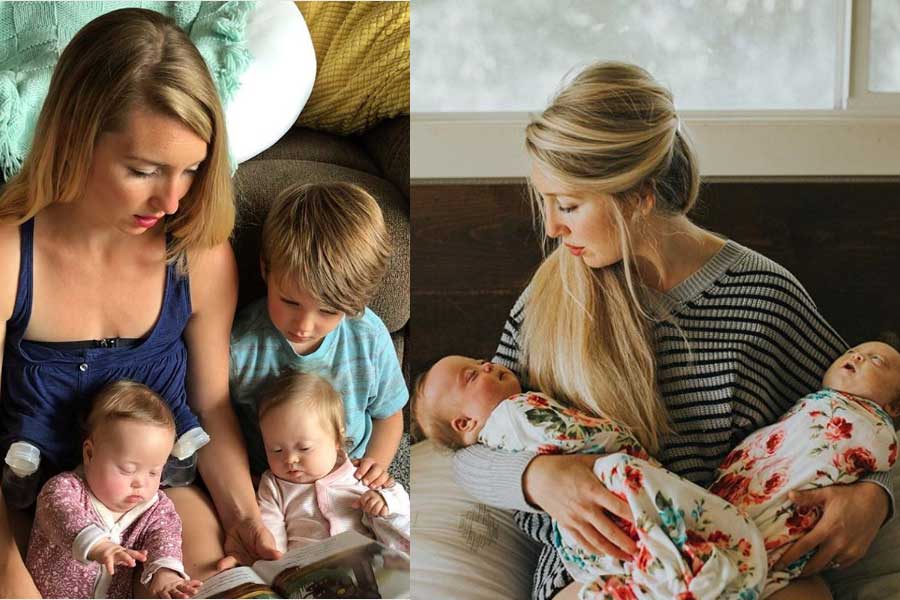 Most of us follow a myth that down syndrome is a disability and with such kind of disability comes only grief in the family. But this is completely wrong. As, after going through this article, you will get to know about the whole experience of a mother who gave birth to beautiful twins suffering from down syndrome and her experience of dealing with such kind of a situation which is truly inspiring for everyone.

1. It really feels great to have twins

Rachael in her interview told that she is the luckiest one to get twins. She told that it almost doubled her fun and she loved it.

2. Handling two babies at once is so exciting

Some folks will be surprised to have two babies at once. But, it is truly a fun and very exciting also at the same moment.

3. For Rachel and Cody, twins were like a big surprise to them

They were so surprised, that they wanted to have one more baby to add to their family.

4. Rachael was expecting some positive news!

Rachael performed a home pregnancy test to confirm her pregnancy. After her visit to a doctor, she was confirmed that she would be giving birth to twin girls. She said in an interview that a lovely nurse practitioner came to my bedside and told me that my girls have down syndrome.

5. The news was shocking at first

Rachael and Cody were not expecting this news. Their excitement turned into nonetheless after hearing this news. Rachael was very nervous thinking that she is going to give birth to wildly different girls than her first two. She was also worried about the health complications which her twins will be facing after giving birth.

Rachael knew that her pregnancy would be going to be a little different. She told that I and my husband were extremely happy from the very beginning. But, I started to get terrified thinking about the whole process of delivery in the operation theatre.

6. My family and friends were pretty supportive

Thanks to the family and friends and the kind support I got from them. Their support has eased a lot of Rachael’s worries. Finally, the two girls arrived The whole delivery process was quite complicated and terrific. But, it was a sigh of relief when both the girls finally arrived.

7. Doctors were trying hard and fast

After the girls were born, they were then rushed to NICU for oxygen, Rachael told. My happiness turned into grief as I was not able to nurse them immediately or feel them from the skin to skin.

Girls turned out to be real fighters Rachael and her babies remained in the hospital for long 47 days. But, both the babies were healthy even after undergoing two back to back heart surgeries.