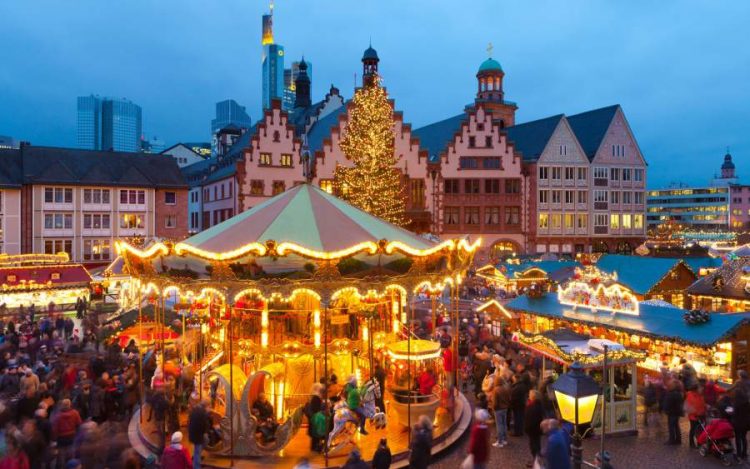 Christmas remains a magical holiday, but German Christmas traditions make it even more so. We already thank Germans for the Christmas tree, of course, but on the enchanted German Christmas, the water turns to wine, animals talk to humans, church bells ring from the bottom of the sea, and more. Only the completely pure of heart experiences this type of Christmas magic, of course.

Which leaves out most of us over the age of, oh, three or so. However, there are other traditional German Christmas events that any of us can enjoy.

Traditionally, Europeans seem to enjoy life more than us Americans, with their shorter workweeks and longer vacations. They have a lot more year-end holidays than us, too, even counting Halloween and Thanksgiving. The German Christmas season actually starts on December 6.

St. Nick does double duty on that day: see, he has to go from house to house looking for shoes or boots that kids leave out. When he gets there, he checks their names in his big Book of Sins (much worse than The List) and either fill the footwear with tasty treats or twigs, depending.

December 21 is generally the shortest day of the year, and it’s also known as St. Thomas Day. Well, in some parts of Germany, you’re awarded the title of “Thomas Donkey” if you wake up the latest, or are the last to arrive at work.

The fun part is, you get to carry around a cardboard donkey all day, and people get to make jokes about you. But it’s all in good fun, and at the end of the day, you get to enjoy tasty iced buns called Thomasplitzchen.

Lest you think I just insulted you with the title to this section, “dickbauch” means “fat stomach” in German. Okay, that still sounds insulting, but really it’s just a title given to Christmas Eve. There’s this legend that if you don’t stuff yourself on Christmas Eve, demons haunt you.

A heroic demon-free Christmas Eve demands the consumption of reisbrei (a cinnamon rice porridge), sucking pig, and (this being Germany) tasty white sausages, among other things.

Of course, all the aforementioned German traditions for Christmas leading up to the Christmas feast itself, which includes Dresden stollen, a fruit-filled bread much tastier than (shudder) fruitcake; Christstollen, a special Christmas bread also containing fruit, as well as nuts and raisins; and a nice, fat roast goose.