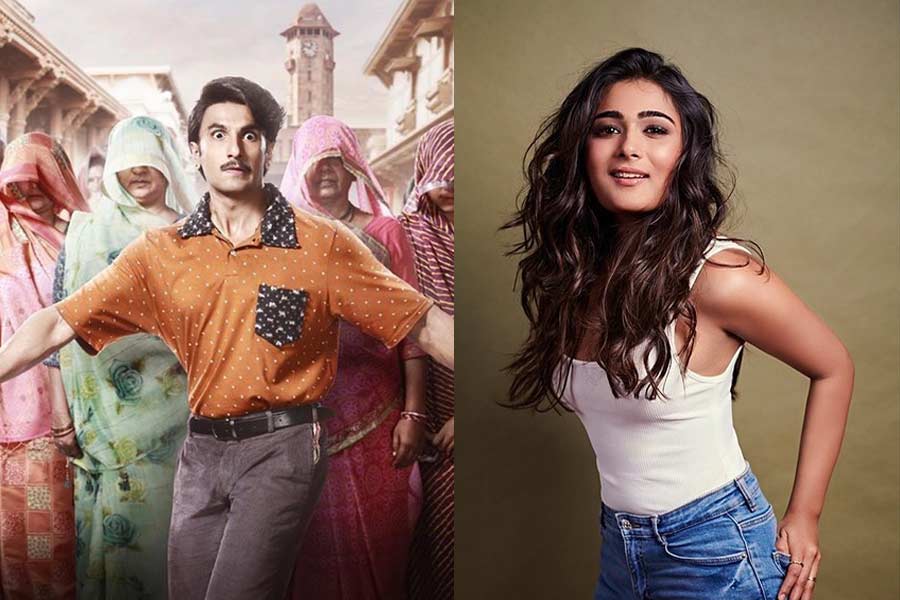 Until now, Ranveer Singh has given so many hit Bollywood movies like Band Baja Barat, Ladies Vs Ricky Behel, Bajirao Mastani and many more. He is back again with a new upcoming movie ‘Jayeshbhai Jordaar’. The new movie looks like a challenge for Ranveer Singh as this is a different kind of role which he has never enacted before. So, he is taking this role as a challenge. Let’s look below for more.

The film producers have revealed Ranveer’s first look in the film a few days ago. Do you know who is the female lead actress who is casting opposite to him? It’s Shalini Pandey. Yes, you get that right. She is a south actress who will make her entry in the Bollywood industry who got name and fame after producing the hit Telugu movie, Arjun Reddy.

And, Ranveer looks like Gujarati Boy in the poster

Well, the first look of Ranveer Singh looks funny after it gets revealed and it giving us some hint also. Ranveer is looking like a Gujarati Boy from the first poster of the film that was released a few days ago.

This movie is a big challenge for Ranveer

Its a ‘miracle script’!!! ? Thrilled to announce my next film – ‘JAYESHBHAI JORDAAR’ ? @yrf #JayeshbhaiJordaar

Ranveer said that he is casting a very different role in the upcoming movie so this character seems like a challenge for him and he is very excited about that.

He said, “Jayeshbhai presented an exciting challenge – to deconstruct myself in order to transform into a kind of character I’ve never inhabited before.”

Maneesh Sharma, the producer of the movie said he wanted some actress with a fresh face to do that female’s lead part. Therefore, they chose Shalini who seems like a perfect fit for this role to them. The producer says she is such a great talent with good confidence. I am sure she will catch everyone’s attention in this movie.

On being selected for this movie,

Shalini said, “Being given the opportunity to be signed on as a talent and also being cast under the Yash Raj Films banner is truly any artist’s dream. I’ve been blessed with this huge chance to show my mettle in the Hindi film industry and I’m incredibly thankful for it. I’m also very fortunate to be sharing screen space with Ranveer Singh who is one of the biggest superstars of our generation and also one of the most versatile actors too. I’m thrilled about being paired opposite to him and this inspires me to prepare myself thoroughly to deliver the best.”