Sonali Bendre is Back with Husband Goldie Behl, However, Fight Against Cancer Still Prevails 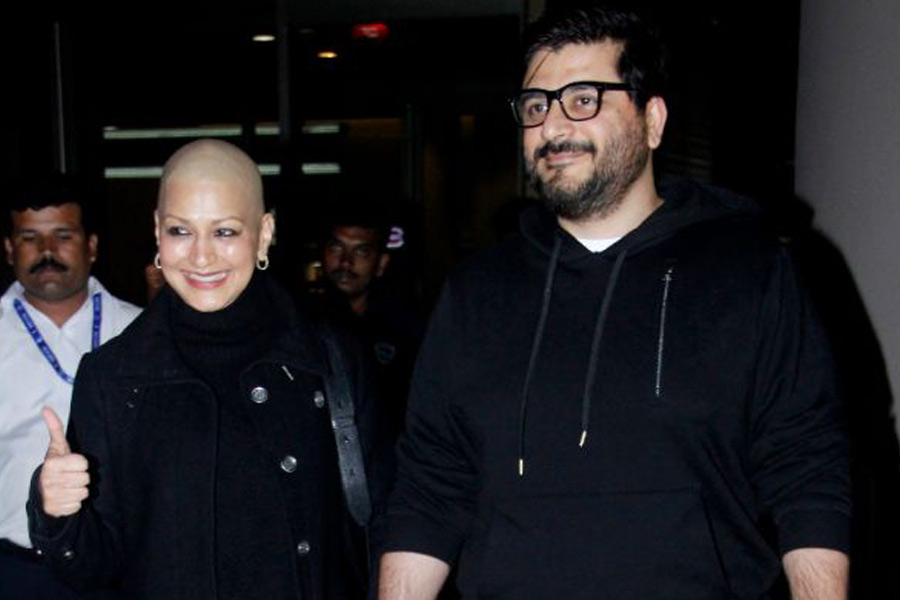 We are all aware of the fact that Sonali Bendre has been giving a tough fight to cancer she has been suffering from. From a lot of traveling to abroad for treatment and more than that taking the various treatments, the journey she is shown is admirable even more than her career. She has shown strength, courage, and patience with her disease and has overcome a lot of obstacles her way.

Recently she was seen at the airport in Mumbai with her husband hand in hand returning.

If you are having a tough time, you should check out her Instagram post. Even after having such hard disease like cancer, she has not lost her patience and she has taken it all on herself very proudly and with dignity. You can always find her smiling and greeting people in a very positive way.

So, if you think your problems are hard enough, well take a look at this lady, living her life even after the pain and stress she must be going through and smiling through all the times so easily and positively in front of all the cameras and then also posting it on social media about it.

As soon as Somali was diagnosed with cancer, the nation was heartbroken. She is a beautiful person inside out and then seeing her in such a condom made us terrible and herself and her family too.

However, now after being diagnosed she went to New York for further treatment and has been there since. She has been posting inspiring posts on social media forever to keep her fans updated about the same and has shown a tremendous amount of positivity in all the country.

She has proudly shown her photos where she is bald, and she is taking treatments. She has never been ashamed of her looks because she knows that no matter what, she is always pretty and beautiful on the inside, and even outside. It has been quite heartwarming to see that she has never ridden a single fact about her disease and her treatment.

They say “Distance makes the heart grow fonder”. It sure does. But let’s never underestimate what distance teaches you. Being away from home in the city of New York, I realized I was walking amongst so many stories. Each trying to write their own chapter in different ways. Each struggling to do it but never giving up. Each taking it #OneDayAtATime. And now I’m on my way back to where my heart is. It’s a feeling I can’t describe in words but I’m going to try – it’s the joy to see my family and friends again, the excitement to do what I love and mainly the gratitude for the journey I’ve had up until this moment. The fight is not yet over…but I’m happy and looking forward to this happy interval 🙂 It’s time to learn that there is a new normal out there and I can’t wait to embrace it and #SwitchOnTheSunshine. #NowPlaying #AdventureOfALifeTime? And as my adventure with life continues these words by Chris Martin hit home, “Everything you want is a dream away. Under this pressure, under this weight We are diamonds taking shape…”

This has made her fans on soda media continue to pray for her a drop her loads of blessings as well. lately, she announced on social media on second of December, that she is on her way back to Mumbai.

This news made all her fans take a sigh of relief so that they can now finally get to see her in her own city. She also posted on social media that she is way too happy to be back in her city where her home is and here her heart lives.

She said that while she was out in another world, she missed her people ad her home a lot and now that she is back, she is happy. The fight against cancer as she says is not over, however she says that this interval is great for her.

Tags: Sonali Bendre is Back
ADVERTISEMENT