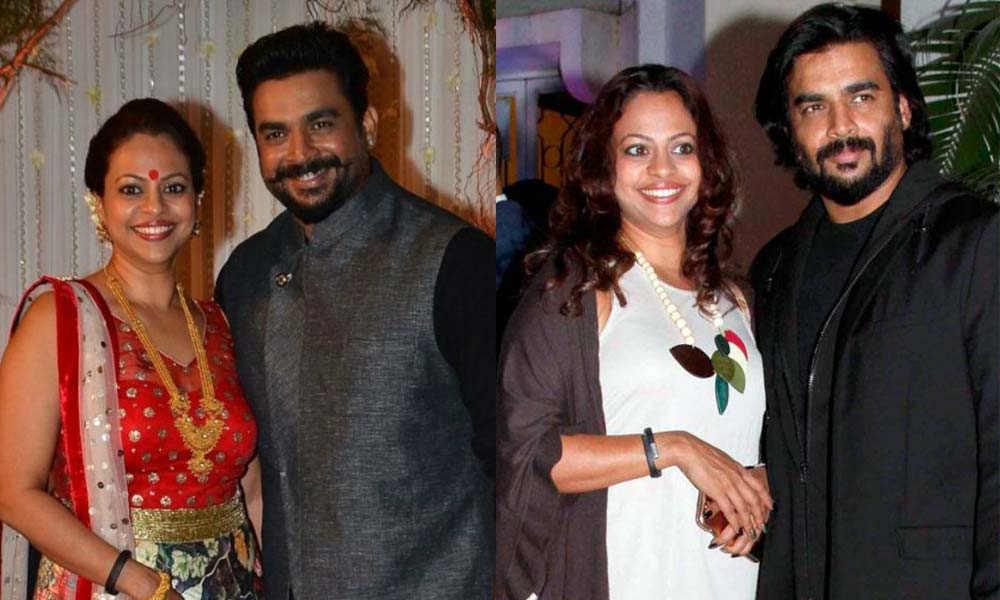 The ever charming, Ranganathan Madhavan who is popularly known as R Madhavan or “Maddy” is one of the most hit actors from Bollywood. He produced ample of movies which became a super hit namely Sala Khadoos, Ram Ji London Waley, Tanu Weds Manu and not to forget when he made his Bollywood debut with Dia Mirza in the movie named, Rehnaa Hai Terre Dil Mein which had made him even more hit among masses.

But most of us might not be aware of their love story, which led them to fall in love and how did they get married.

We’ll have a closer look at what led them to live a most happier and successful life.

Sarita was Madhavan’s Student, they Both Met at Communication Workshop in 1991 in Maharashtra

Madhavan wanted to join the Armed Forces but was deemed ineligible for the same due to the eligibility criteria. It was that which has brought a U-turn in his life and he planned to choose an alternative career and started teaching courses in Public Speaking.

There, he met Sarita Birje who is her wife now considered becoming an Air Hostess joins Madhavan’s classes on being given the recommendation from one of his relatives to prepare for the interview.

Sarita asked out for a Date with Maddy

As told earlier, Sarita Birje was her student and he was his communication teacher. Impressed by his elegance and charm, she fell in love with him and asked him out for a date after when she gets selected in an air hostess interview.

In an interview, Maddy told that he thought himself to be a man with a dark complexion; he sometimes doubts that will he ever be getting married to anyone. Thinking about all this, he grabbed the opportunity and married her in 1999. This is how they get started.

They opt for The Private Wedding

After dating each other for almost eight years, the duo gets married in 1999 following a Tamilian tradition in Chennai. Back in 1999, Madhavan was not that popular as he is now.

It is due to this reason, his wedding was mostly a private affair with some of his close friends and family members.

He Grabbed His First Movie “Alaipayuthey” In 2000

The duo gets married in the year 1999, and right after one year, Maddy got his first film Alaipayuthey in 2000. His performance as a debut actor was widely appreciated in the movie due to his sharp acting skills.

It was then after that, he made a Bollywood debut in Rehnaa Hai Tere Dil Mein with one of the popular actress, Dia Mirza.

Sarita Gave Birth to a Baby Boy named Vedant in 2005

In the year, 2005 Sarita has given birth to a baby boy, Vedant adding a sea of happiness in their married life. Madhavan in an interview told that all the credit goes to her wife Sarita who made him and also said that he never lets jealousy and suspicion creep into his life, and does that by keeping transparency in their relationship.

He even let her phone to be with her wife all the time when he is busy to handle all the calls, and this is what has built trust and strengthen our relationship even more.