The Arctic is Melting: We Should Reduce The Activities That Cause Global warming and Leads to The Melting of The Glaciers 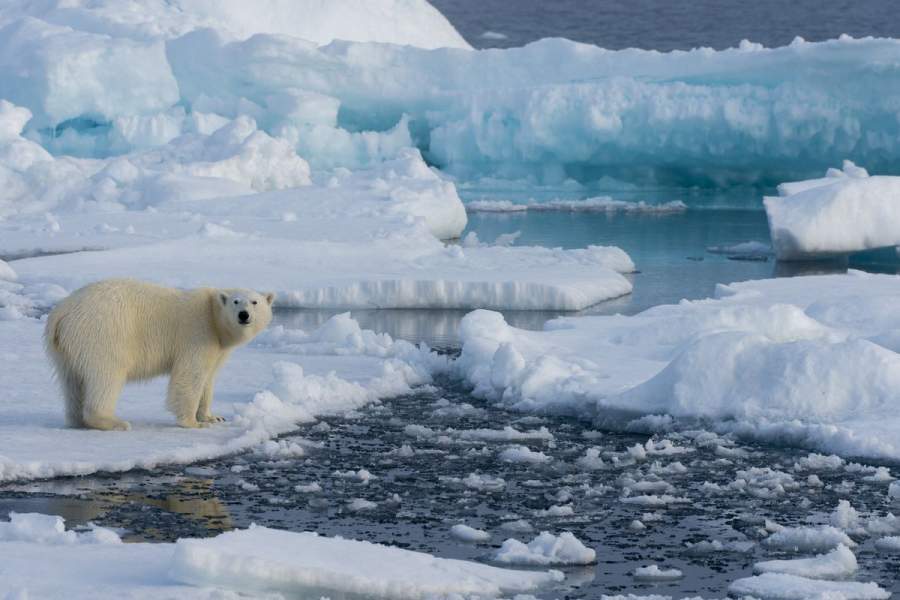 We are all aware of global warming and how it is causing drastic climate changes. We are also aware that global warming is actually a result of human deeds that is causing our earth’s climate extremely. And here at this time in summer ice melted the thick surface of Greenland and a climate researcher, Steffen Olsen captured it in camera for the world to see the melting ice.

The pictures might look fascinating but it is a matter of concern and awareness. Read the whole report below:

According to the source Climate researcher Steffen Olsen, along with some locals, traveled on the sled dogs for monitoring the climate and he captured the flooding icy water which is melted ice surface, in Greenland.

He shares the picture where sled dogs splashing into the cold water. The melted ice created a lake or pool where sea ice is still 4 feet beneath it. He tweeted the picture on his Twitter account saying “Communities in Greenland rely on the sea ice for transport, hunting, and fishing. Extreme events, here flooding of the ice by abrupt onset of surface melt call for increased predictive capacity in the Arctic”

Set out to recover #climate monitoring stations on #seaice, warm days, Inglefield Fjord #Greenland 13 Jun. Could not push through here, but made it before breakup days later. Back @DMIdk, huge thanks to the team; Ângît, Paulus, Aksel, @BG10BlueAction @ICEARCEU @SalienSeas #H2020 pic.twitter.com/eGvfoTg7gC

The temperature at the Arctic raised drastically in the mid-June resulting in melting the huge part of the island. Although, it is not the first time Greenland has witnessed ice melting, this time it is massive and greater than ever before.

The Arctic is the fastest warming region, which is a matter of concern. The more the warming be the faster ice melting process will take place in areas nearby the Arctic region. This is why area like Greenland is witnessing high temperature in the summers.

If anything that it is a concern that making scientists struggle for an explanation. Warming of the Arctic is a huge risk for the whole planet. Meteorologist Eric Holthaus tweeted “The Greenland ice sheet is currently going through a major melting this week, covering almost half its surface- unprecedented in its extent for this early in the year. This has not happened before.”

The Greenland ice sheet is currently going through a major melting this week, covering almost half its surface — unprecedented in its extent for this early in the year.

This has not happened before. pic.twitter.com/vvh3scodLy

He also shared graphics data that shows the increase in the melting in the month of May and June. When geologist and meteorologists are showing their concerns and helplessness, we all should understand how grave the matter is. Whatever the consequences are of this massive climate change, it’s us who have to face it.

The #Greenland “heatwave” continues – another high #ice loss day yesterday – the highest so far this year in fact – with more than 3 km³ lost.
Forecast shows warm conditions continuing the next few days, but cooling off later in week.

So, instead of waiting for the world to end, at least we should make endeavors to reduce the activities that cause global warming and consequently leads to the melting of the glaciers.