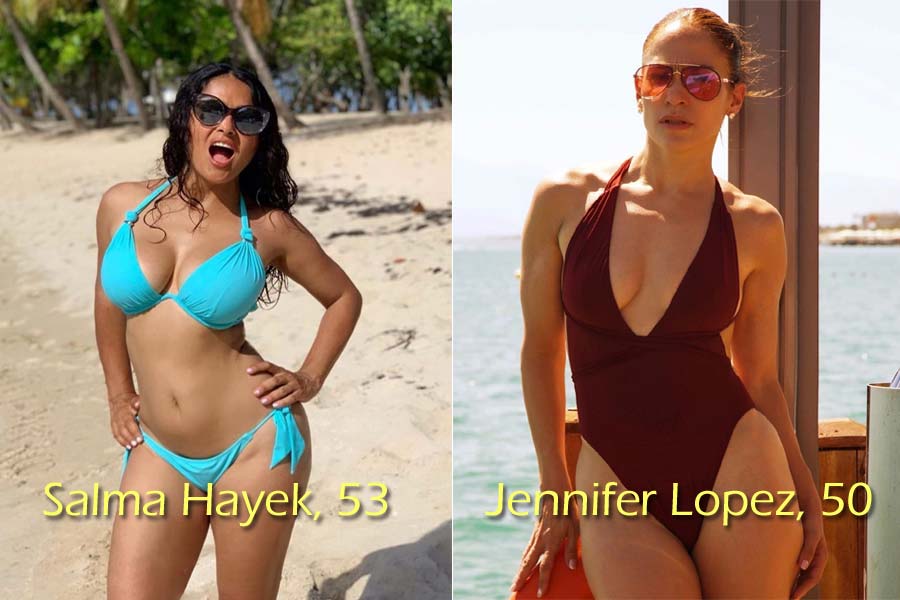 Well, this expression that says, age is just a number is so true. With age come many changes in your life. One may have different concerns, some are worried about their personality and beauty while some are worried about something else. You might have seen whether we talk about Hollywood or Bollywood, there are different actors and actresses who are in their 50s and still look so young that you can’t even guess their real age.

The best examples from Bollywood who defy age are Salman Khan, Anil Kapoor, Malaika Arora, and Kareena Kapoor Khan among others. On the other hand, if we talk about Hollywood stars we have a countless number of actors who have crossed their 50s and still look so young and graceful. Yes! We are jealous.

Look at some of these stunning women who are over 50 and are giving fitness goals to each one of us by showing off themselves in hot bikini avatar.

Salma Hayek who is a popular actress from “Frida” has turned 53 years old recently and she took to her Instagram a special picture of her. In the picture, she could be seen wearing a bikini with a caption, “Yes, tomorrow I’m 53. So?!” The actress looked really so amazing and feels proud to show her sexy curves. The best part was she felt carefree and looked natural as she didn’t put any makeup on her face which is commendable.

At the age of 54, Actress from “The Royals” is famous for her swimwear. Not only this, but she is also popular for flaunting them online. If you will look at her, you will not be able to judge her real age as she has a flawless face. She looks extremely bold and hot whatever bikini she opts to wear. Like from red hot bikini to white and black striped two-piece set, she is making everyone jealous of her sexy figure.

Jennifer Aniston is an American Hollywood actress who has performed in many hits including Friends, Horrible Bosses, Breakup and many more. Earlier this year when she was going for a getaway to Mexico, she had been photographed in a mismatched bikini in which one could clearly see her flawless face and her toned body.

She is very popular for posting her hot and bold bikini avatars very frequently on social media. Well, she has an amazing body and also six packs abs which could be clearly seen in one of the pics which she had posted recently on her social media.

Even in her 60s, she looks damn hot and flawless. On her last birthday, she shows off her perfectly toned body in a multi-coloured printed two-piece bathing suit.

She knows how to flaunt and therefore she never misses the opportunity to share her bold pics in hot bikinis on social media while playing in the pool. Recently, Courteney Cox had posted her pic where she is wearing a black two-piece on and relaxing on a poolside.

She is 63 now but doesn’t look like. She knows well how to defy age as she keeps on adding that sexy quotient by posting her hot pictures on her social media in bikini wear. Have you seen her pic where she is showing off her cleavage in a leopard print bikini suit?