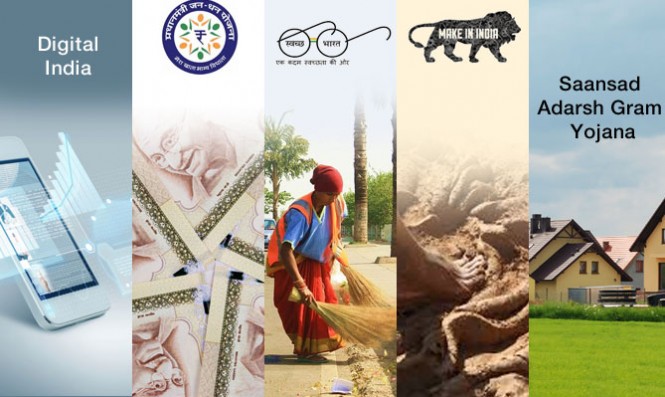 Since 2014 many of these schemes have been launched which have proved a great success for our country’s growth and has provided an increase in both economic and financial development of our country?

Let’s see the Top 5 Central government schemes which have been launched by the government of India.

Having your own home is still a dream for many people in our country. Expensive land and construction have made it really difficult for the weaker sections of our country. The Central Government has understood this need of the poor and because of this Prime Minister Narendra Modi launched the Pradhan Mantri Awas Yojana in the year 2014 with the aim to provide the roof over the heads of those who need it.

Almost 2 Crore peoples will get their own house before the year 2022 and people may apply for this so as to get their names in Awas yojana list and benefit from this scheme.

On August 15, 2014, Prime Minister Modi declared the PM Jan Dhan Yojana, which came in the working from August 28, 2014. Under this scheme, about 11 crore accounts have been opened till now.

Pradhan Mantri Jan Dhan Yojana was launched with the aim to provide financial assistance to poor people. By this, anyone can open their bank account in the banks without any fees. This scheme provides many benefits such as insurance and overdraft facility. This is among the most successful financial schemes of our country.

Unemployment in India is a huge problem and keeping that in mind the Prime Minister launched the Pradhan Mantri Kaushal Vikas Yojana in the year 2015. This scheme comes under the new National Skill Development and Entrepreneurship Policy.

The scheme was announced as PM Kaushal Vikas Yojana under the Skill Development Mission. This scheme works in order to increase the skills of the youth of our country so that they can become skillful and can earn a livelihood for themselves.

The Government of India main motive is to provide the people of this country social security and a healthy life. For this very purpose, the government has brought Rashtriya Swasthya Bima Yojana (RSBY). This scheme provides medical insurance to the poor or weaker sections of the country.

Prime Minister Narendra Modi launched the Pradhan Mantri Mudra Yojana in order to assist small entrepreneurs in the country. PM Modi had described this scheme as very important for the development of the country as it provides financial aid to the youth of the country who needs to grow their business.

Emphasizing the contribution of small entrepreneurs in the economy, Mudra Yojana was launched. In this scheme, the government provides a loan of Rs 50 Thousand to 10 Lakh to those who want to start their own business.

Conclusion: All the above-given schemes that are launched by the Central Government of India have a great impact on the Economic and Financial Development of India. We hope the Government will launch more of these schemes for the betterment of our country.

All You Need To Know About New Fund Offering (NFO): Benefits And Risks

What To Ask A Dubai Stockbroker Before Signing Up with Them

The Right Way to Incorporate Gold into Your Personal Savings