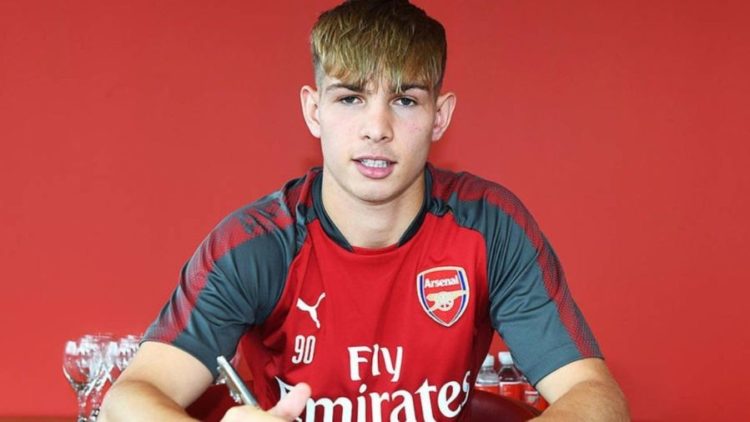 Football is one of those sports that keep you constantly engaged and hooked to your seats. Especially if you have watched the star footballer Emile Smith Rowe playing his magical shots, you just can’t get up from your seats. So Smith Rowe joined Arsenal when he was around nine years old back in 2010. Moreover, he came through the youth system at the north London club. So you can well understand that from a very young age he has been a part of a popular team.

Who is Emile Smith Rowe?

Since you are reading this, it is evident that you are eager to know about Emile Smith Rowe’s life. Well, you are at the right place as we will share with you some of the significant details of his life here. Emile Smith Rowe was born on 28th July 2000 in Croydon, London, in the United Kingdom. Therefore, he is around 21 years old. Yes, he has already gained immense popularity at a very young age.

So if you are a fan of his, you will know that he made his competitive debut for the Arsenal first team in September 2018. At the same time, he has spent loan spells away at RB Leipzig and Huddersfield Town. Moreover, Smith Rowe scored his first goal for the Arsenal first team in October 2018. So this was indeed a great achievement at such a young age.

If you have watched his matches, you know that he is a midfielder. However, England capped him at U16, U17, U18, and U19 while progressing through Arsenal’s Hale End academy. Did you know he has represented the U21s? In fact, he also made his senior England debut in November 2021. Now let us look into some details about his early life.

As mentioned earlier, he was born in London, England. In fact, he spent in Thornton Heath in South London. Later in, he relocated to North London with his parents and older brother after he signed for Arsenal as a nine-year-old back in 2010, joining the club’s Hale End Academy. In fact, his mother and father both work in education in North London.

As per the sources, his father was also a footballer at a semi-professional level. In fact, he had developed an interest in football from his father. He was always an inspiration to him. Smith says, “I always looked up to my dad.” Furthermore, the midfielder is close to his family and has attributed them with helping to support his development as a young player. Moreover, he says, “I never used to be confident in myself, but obviously, my family is around me, all the coaches have been helping me, and it pushed me really.” He indeed feels grateful for everyone around him.

Also read: What is The Football Ticket Refund Policy at Arsenal?

As we mentioned earlier, he started playing for the youth team of Arsenal in 2010. He was just 16 years old when he first appeared for the U23s in 2016. In fact, at the age of 17, he joined the senior team for their pre-season tour of Singapore.

At the same time, he made his Arsenal first-team competitive debut in 2018 in a 4-2 win against Vorskla Poltava in the UEFA Europa League. It was in 2019 that he joined RB Leipzig on loan. After that, in 2020, he joined the EFL Championship side on loan. He also suffered from a lot of injuries during this period. He returned to the team in 2020.

Furthermore, the club voted him as the runners-up due to his excellent performance. In January, he also became the Player of the Month on Arsenal’s official website. Pretty recently, in 2021, he played in the North London Derby for the first time. He also delivered a Man of the Match for his performances in a 2-1 win over Tottenham Hotspurs. So you can well understand the milestones he has already achieved.

If you look at the records of his international career, you will find that he has represented England at U16, U17, U18, U19, U20, and U21. He was also a part of the U17 FIFA World Cup with England in 2017. However, he is yet to make his senior international team debut.

His Contract with Arsenal

So it was on 31st July 2017, Smith Rowe signed his first contract with the club. Needless to say, he is the star player of Arsenal club. In fact, they congratulated Emile Smith Rowe after the formation of this contract. They look forward to his continued progress in the year ahead.

Many of you might not have heard about it, but when Smith was 17 years old, he joined the club’s senior teams for their pre-season tour of Singapore. As per the sources, it was in July 2018. In fact, after scoring in the 1-1 draw against Athletico Madrid in the International Champions Cup in 2018, the star footballer signed a new long-term contract with Arsenal.

Furthermore, his contract confirmed Arsenal boss Emery praised the midfielder’s shots. He was very much pleased by seeing his performance. Therefore, he left no stone unturned to get him to his team.

Later on, Smith Rowe joined the German side, RB Leipzig. It was actually a six-month loan deal in the 2019 January transfer window. However, Smith was struggling with an injury at the time. Therefore, he ended up playing only 28 minutes in three substitute appearances.

So as we conclude, we can say that Emile Smith Rowe is indeed one of the greatest young footballers of all time. Within just 21 years, he has achieved quite a lot, so we can guess that he will soon make his debut on the senior team and create new records. Therefore, if you are a fan of his and want to know about his life, have a look at this article.