11 Most Beautiful and Intellectual Female IAS/IPS Officers of India 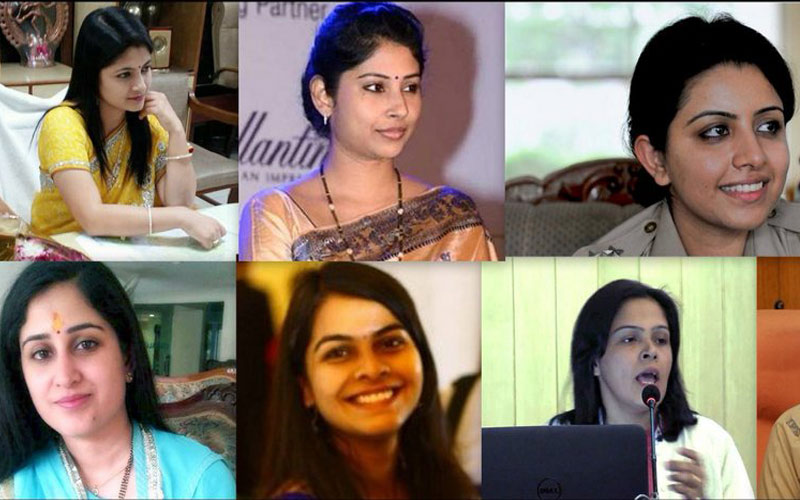 In India, a lot of importance is given to education and career, now. There was a time when people wouldn’t want their kids to study, but now even a poor man wishes to see his child become successful one day. From the very beginning, they plan to see their kids as doctors, engineers and so. Students, too, are very active to look forward to making their future bright. Gender bias in the field of education is so fat eradicated in some places. And this we can proudly say when we look at these most talented and beautiful female IPS/IAS officers of India.

Meet the 10 Most Beautiful IAS, IPS Officers of India

She was an IPS officer from 1973-2007. Not just that she was the first female IPS officer to become the Director General of Police. She sure set examples for all the female students and young aspirants that women have equal power to themselves as the men do.

She passed the UPSC exam in 2004. She belongs from Kerala and presently, serving as the magistrate of Gonda district of U.P. With her grace, generosity, and ability to stand above the societal norms she has proved that women are not just a pretty face. They are a lot more and beyond.

She became IAS officer in 2008. Her rank in the civil services exam was 409th.  Presently she is, serving as District Magistrate of Bulandshahar. This is in the face of all those loosers who believe woman are only good to run the household. Here, we have greater personalities in the world who have proved themselves as a woman that they should not be gauged less.

She was the IPS officer from the batch 2006. Parashar also bags the title for being the very first IPS officer from Assam, she fought against the Bodo militants of Assam. Her beautiful face and brilliant mind is an example of “beauty with brains.

Alumni of St. Stephen’s, D.U, Vandanabecame IAS in 2003. Officer Vandana hails from Bihar, a state where women are given less leverage than men, yet she breaks through the ties of society and stood up against the crimes that take place in Bihar.

She is an IAS officer from the batch of 1981. She became the first female IPS officer in Maharashtra Cadre from Fazika, Punjab. People also know her as ‘Lady Supercop’. Bollywood movie ‘Mardani’ was also based on her life.

Officer Joseph bags the title of being the youngest IPS officer in Kerala. She is another one who is living the example of beauty with brains. She passed the UPSC exam in 2012, at the age of 25. At such a young age, she proved that dedication and hard work pays off.

Officer Riju Bafna passed the UPSC exam in 2013 with 77th rank( the result is jaw-dropping). She hails from Chhattisgarh, and become an IAS officer in 2014. She married her batch-mate Avi Prasad, who is also an IAS officer. Her charming smile and beautiful face sure compliments her brilliant brains.

She a very popular IAS officer. She as more success in her accounts as Vimla is the second officer after Kiran Bedi who commanded Tihar Jail as Director General.

Stuti’s first job was a PO in a bank, after which she sat for civil services and cracked it with securing the third position.

Ms. Hari Chandana Dasari is an IAS officer of 2010 batch of the Telangana State Cadre. Currently, serving as the Collector and District Magistrate of the Narayanpet district, Telangana.

Previously she worked in various zones of the GHMC covering a span of over five and half years tenure and was instrumental in bringing the Hyderabad City onto the National and International forum, with her wide variety of Eco-friendly and path breaking initiatives in all spheres of Urban administration.

Known to come up with ingenious schemes for the betterment of the poor and the needy, she has been quite effective at implementing them to the tee. Initiatives like Feed The Need, Pet Park, Plastic Recycled Foot Paths, Usage of Drones for the first time in fighting mosquitos, Give And Share, Durgam Cheruvu Rejuvenation are some of her spectacularly successful projects that have led to betterment of the ecosystem. Her contributions also include initiation of “She Toilets” and “She Marts” in Hyderabad, popularly known as Pink Public toilets and most vibrant for the first time securing an ISO 14001 certification for a Govt office ~ Zonal office – GHMC Serilingampally, India’s first Zero Waste Office.

Her guidance and effective persuasion as the jurisdictional civic chief was crucial in the construction of the World’s Longest Extradosed Cable-Stayed Bridge erected at Durgam Cheruvu, Hyderabad.

Hari Chandana’s contributory in the introduction of luxury toilet cafes (LOO Cafes) in the city of Hyderabad which enable citizens free of cost access to hygienic washrooms is much lauded as well, so much so that these are being implemented in the Union Territory of Jammu and Kashmir.

It is indeed no wonder she was selected as one of the Top Four Successful & Dynamic IAS/IPS officers making a difference across the Nation in Shekar Guptha’s ‘ThePrint’ and among the top 10 IAS officers chosen by the better India for her contribution toward Green Governance.

Ms. Hari Chandana is an avid reader and a green warrior apart from leading from the front in the fight against #COVID19 wherein Narayanpet district was largely successful in curtailing the spread of the Pandemic.

Also read: 10 Most Beautiful And Talented News Anchors Of India