Story of La Pascualita: A Dummy in A Bridal Shop Window in Mexico 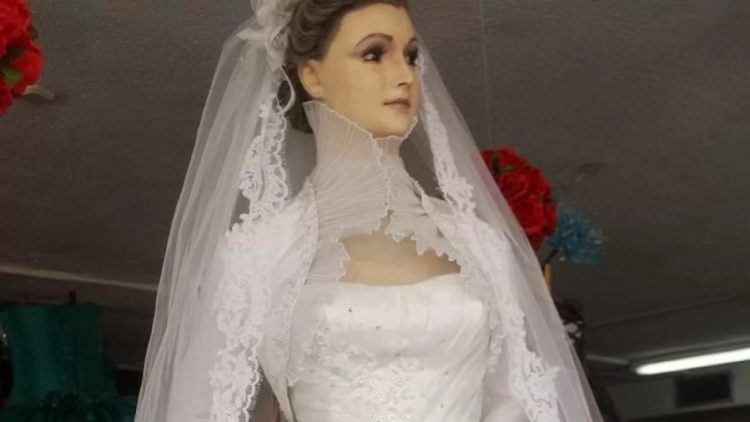 It’s not uncommon for tourists to be engrossed by embalmed corpses. In fact, there are several instances, where these macabre corpses have some story to tell. In other words, there is some historical significance behind them. So, if you are going to a shop, and see a very real-looking dummy model, who knows, maybe it’s a real corpse of La Pascualita:. Well, that’s how the urban story goes with a shop in Mexico, where people are of the opinion that the strange and real-looking dummy is indeed a corpse.

In this article, we will be talking about the story of La Pascualita, a shop in Mexico.

Mannequin or Corpse? The Story of La Pascualita

In Chihuahua, Mexico, there’s a famous shop for wedding dresses. However, the most attractive feature of the store has been the dummy, or the Mannequin, which looks pretty much real. It is a dummy in a bridal shop that has lived for almost 90 years. Needless to say, this doll has some history behind it. According to the legend, it’s not a dummy, but a preserved corpse of the original owner’s own daughter.

Furthermore, the color of the skin, the veins, wrinkles, and especially, the eyes, and every other feature don’t make you believe that it’s a mannequin.

The La Pascualita story follows the original owner’s daughter who died on her wedding day, and thus, the owner preserved her body as a mannequin doll. Well, that’s how the story will go on!

How Did the Girl Die?

Well, if you are a fan of folklore and urban legends, then you are probably curious about the cause of her death.

According to the sources, the shop owner Pascuala Esparaza’s daughter probably had died on her wedding day. A black widow bit her and poisoned her. After that incident, people saw the mannequin doll in the shop which looked identical to the girl.

From the very features of the face to all other characteristics, it was almost identical. It’s like those eyes had probably seen the light before.

Some Strange and Eerie Facts Regarding the Doll

Over the years, people have complained about strange happenings. They claimed that the eyes of the doll followed them as they walked around the store. Moreover, some of them even claimed to find the doll in a different position from what it had been minutes before.

A customer said, “Every Time I go near Pascualita, my hands break out in a sweat. Her hands are pretty realistic and she also has varicose veins on her legs. I believe she’s a real person.”

There’s another interesting urban legend. People say that it was actually a real mannequin doll. However, one day, a French magician loved the doll so much that he enchanted it with magic. Thereafter, it came to life.

Whatever the origin of the doll is, it’s undeniable that it has become a local legend in its own right. While some of the tourists find the doll to be eerie and strangely life-like, others just pass on, thinking it to be some random doll. All in all, we may say that, despite all the rumors and stories, it has become a good business option for the current owner.

How to Get a Memorial Bench in a Park

Who Invented Blow Up Dolls? Truth and Facts